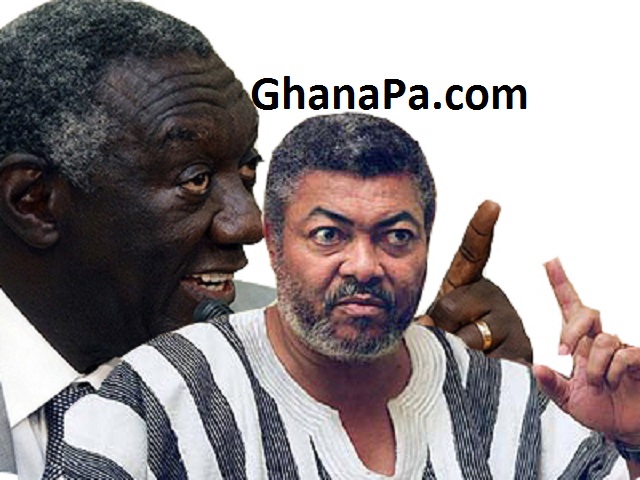 Former President John Agyekum Kufuor has sent a rebuttal to his predecessor President J.J Rawlings on allegations he allowed illegal structure Villagio to be erected on waterways through the deals he cut.

In the official response transcribed by MyNewsGh.com, former President Kufuor through his spokesperson Dr Kwabena Osei Adubofour says Rawlings should be the last person to speak about integrity.

“He [Rawlings] talks about integrity? You know, that is like the pot calling the kettle black… He is the last person to talk about integrity”, Mr. Kufuor’s spokesperson said on Joy FM yesterday.

According to the former President Kufuor, Rawlings speaking about him and mentioning Nkrumah’s name positively is ‘hypocrisy’ because Rawlings has worked against the Nkrumah family, including fighting against Fathia Nkrumah’s final wishes.

“He [Rawlings] also pontificates like he is a lover of late president Nkrumah.. That’s not the truth. When Acheampong gave a bungalow to Nkrumah’s family, it was Rawlings who took the bungalow and gave it to D.F Annan .. When Fathia wanted to be buried beside her husband, we all know what Rawlings said about that” Kufuor’s spokesperson said.

“Someone built his hotel and later buys it. So Kufuor’s son bought African Regent, what is wrong with that?” he asked.

“What is he trying to achieve? We are talking about floods and you bring in Kufuor… You pick a grudge against Kufuor because he replaced you.. You couldn’t have been president forever.” He said.

On conniving with Villagio and African Regent, the spokesperson said “Kufuor doesn’t give permits. No one builds and goes to the presidency for permit to build”.

MyNewsGh.com earlier reported about how Mr. Rawlings claimed that Kufuor is the pacesetter for illegal structures that stand in waterways, causing annual floods and that anyone else guilty of the crime is only following Kufuor’s lead.

Rawlings made these allegations when he received Ghana Journalists Association (GJA) delegation at his office in Accra on Thursday, October 31, 2019, where he took the opportunity to comment on current happenings in Ghana including the recent mass failures in law school.

Rawlings took a swipe at former president John Kufuor for “building” Villagio and acquiring African Regent hotel under the guise of making it a library or clinic but maintaining it as a hotel.

Rawlings said even though Kufuor had complained African Regent was overlooking his house and posed a security threat, he acquired it.