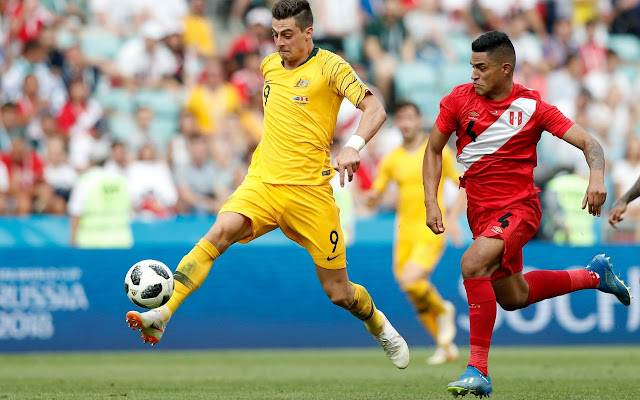 Australian sport has not had too many weeks as bad as this one. Beaten in the rugby by Six Nations champions Ireland, who claimed their first series victory down under for 39 years with a 2-1 win, Australia’s cricketers were then subjected to a first ever 5-0 series whitewash by England in the one day internationals.

Now the country’s football team have completed an unwanted hat-trick for a proud sporting nation. With Denmark  claiming a point against France, victory over Peru would still not have been enough to secure Australia a place in the last 16 of the World Cup but, on a muggy afternoon in Sochi, they exited the tournament with something of a whimper.

Bert van Marwijk, who now steps down as Australia’s coach, could point to a flurry of missed chances in both halves, a  profligacy that felt all the starker when framed against Peru’s ruthlessness for whom Watford’s Andre Carillo scored a stunning volley and Paolo Guerrero what could yet prove his last goal for his country.

But, as Van Marwijk acknowledged afterwards, goals always threatened to be hard to come by for his side. Their two against France and Denmark both came from Mile Jedanik penalties and, just when Van Marwijk needed his attack to  ignite, instead it was found sorely wanting.

“Against France, we were at  least equal, and against Denmark even better and this was the same but we couldn’t score and that’s something this squad are lacking at this level.

If you create chances, you have to score,” the Dutchman said. “I saw France and Denmark against Peru and in both games they had chances to win both those games like we did so you can come to the conclusion that France and Denmark had more luck than either of us.”

Peru’s journey also ended here but their first World Cup for 36 years has been a celebration from start to finish. This was a perfect send-off for their wonderful supporters, who have enriched this tournament with their passion and joy  and who filled four-fifths of the Fisht Stadium.

Tom Rogic, Matthew Leckie,  Aziz Behich and substitute Tim Cahill, who became the first Australian to appear at four World Cups, all had notable opportunities to score but the game will be remembered for a bullet from Carrillo and a 35th international goal for Guerrero, whose appearance in Russia remains controversial after he tested positive for traces of cocaine in his urine.

The game was 18 minutes old when Carillo scored, drilling a sublime angled volley into the  far corner from Guerrero’s measured pass after Trent Salisbury had failed  to deal with a long ball forward. Australia will kick themselves that they  failed to make more of their chances but Peru’s centre-half pairing of Anderson Santamaria and Christian Ramos made a number of fine blocks and  interceptions to deny Rogic, Leckie, Behich and Cahill.

Peru claimed a fortuitous second when Christian Cueva’s cross deflected off the inside of Jedanik’s heel into the path of Guerrero, whose shot took a touch off Mark  Milligan as it flew in. A Swiss tribunal temporarily lifted Guerrero’s 14-months drugs ban after he argued the positive test was a result of  drinking “coca tea”, which Peruvian players use to combat altitude sickness, but, at 34, there is no guarantee he will play for Peru again if he loses his appeal.

Ricardo Gareca, the Peru coach, also faces an  uncertain future with the Argentine admitting he needs to take some time to consider if he wants to carry on. “There are lots of different issues to look at and I need to think it over with a cool head because coaching the national team is a huge responsibility,” he said.