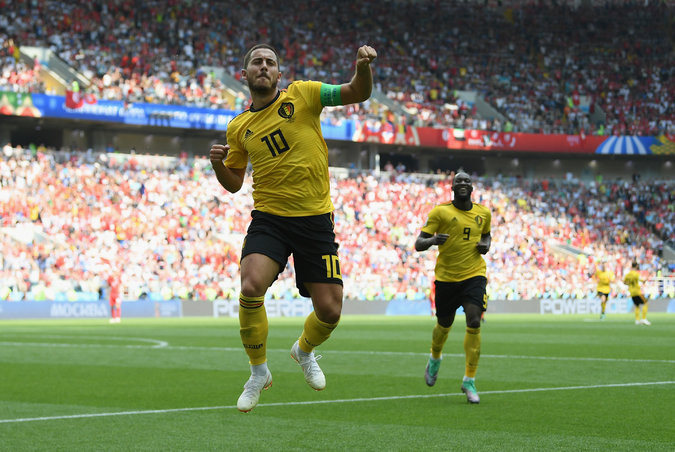 Eden Hazard of Belgium celebrated after scoring one of his two goals on Saturday against Tunisia.

Belgium in 2018: a team who create many more goalscoring chances than they convert with a 40-goal centre-forward who is only 25 years old – and yet with qualification almost assured, Romelu Lukaku is not likely to be a concern for England yet.

Lukaku came off injured as Roberto Martinez’s team pasted Tunisia under warm summer rain in Moscow but not before the striker had scored the 39th and 40th goals of his international career. Had he scored them in an England shirt, Belgium’s all-time top goalscorer would currently be tied for fifth place on the all-time list with Michael Owen, who had a similarly prolific early career, but even he did not score as quickly as Lukaku.

The Manchester United striker now has 23 goals and four assists in his last 20 games for his country and for all those chances that slip away this is a team that creates them by the bucketload.

When Lukaku bears down on goal, or runs in behind onto a pass from one of the many creatives in this team, you can never be sure what kind of finish is coming but – as with his club – he finishes enough to be a very significant figure at this World Cup finals.

There were two more for Eden Hazard as Belgium dismantled Tunisia in a way that England could never manage when they won in injury time against the North Africans in their opening game, and much of it was impressive.

Hazard flitted around the Tunisia area, drawing one of the competition’s most reckless fouls from Syam Benyoussef after just four minutes which gave him a penalty that set Belgium on their way. Before the end, when the substitute Michy Batshuayi buried one of his five chances, it was possible to have lost count of all the opportunities that Belgium had passed up to make this game the biggest-margin win of the tournament so far.

They still managed to concede a second in the third minute of injury time and it was that moment, and others, which will give their opponents in the later rounds reason to think.

Lukaku, who came off with an ankle ligament injury that Martinez said will be assessed, looks unlikely to be in the team that faces England in Kaliningrad on Thursday. Belgium will qualify for the second round if England avoid defeat to Panama and Martinez said if that is the case he will make “major changes” for Thursday, including Hazard who has a calf problem.

Even so, both nations facing the difficult question of whether first or second would be more advantageous. Martinez said he would only try to win Thursday’s game, although the thought must have occurred to him that second could be better. “Football has a strange knack of punishing you when you don’t do things professionally,” he said. “What’s important is that every player will have a role to play, we will take it very cautiously and approach the game against England really well. We won’t be thinking of anything other than approaching that game really well.”

The obvious weakness is at the centre of the three-man Belgium defence where Dedryk Boyata, the Celtic defender, is not quite of the standard of Toby Alderweireld and Jan Vertonghen either side of him. He was well protected in this game but better opposition may well feel they can pick away at that defence and Tunisia’s breakthrough came from a left-sided free-kick.

Tunisia were set up to try to win the game, although they never looked like they would from the moment Hazard was taken out around the ankles in the opening stages. Their coach, Nabil Maaloul, suggested that his players never recovered from that first penalty, even though they were briefly at 2-1 thanks to Dylan Bronn’s header from a Wahbi Khazri free-kick, with the defender then injured and substituted, one of two Tunisians who did not last the first half.

They simply did not have the quality to break down Belgium more than a couple of occasions, although there was a high-quality performance from Khazri who got his goal right at the last. A desperate time at Sunderland seemed no impediment to a very promising World Cup finals for the man now on loan at Rennes and he was skilful and explosive when on the ball.

Martinez said that it was an “open game” which was an understatement given the freedom Tunisia afforded their opponents and some of the passing was breathtaking, with Dries Mertens and Hazard combining for the move that lead to the penalty. “You have two options,” Martinez said. “To play through the press you have really good opportunities, and if you don’t get through the press you will concede chances.”

The reality is that with Kevin De Bruyne, Hazard and Mertens there was no chance of Belgium not finding a way through. Lukaku’s shot for his first was scuffed slightly but deceived Farouk Benmustapha. The Manchester United man did not always have his first touch tuned up and one would later run away from him before he made it 3-1 with a delicate dink over Benmustapha from a fine straight ball from Thomas Meunier through the Tunisia defence.

That was just before half-time and at 3-1 down Tunisia had lost all shape and most of their hope. The fourth came from Alderweireld in the right channel who struck it from his own half, a long hit that dropped over the defence and Hazard took on his chest, then once with his left foot to steer past Benmustapha and another with his right to finish.

The first Tunisia goal had come from a set-piece and Martinez said that the high number of goals from dead-balls was a consequence of the video assistant referees spotting grappling in the area. This time Bronn made a run from deep in the area and was not picked up by the Belgian defence, glancing a fine header past Thibaut Courtois.

On as a substitute for Hazard, Batshuayi conspired to miss a run of chances, including one cleared off the line, another against the bar and one that Benmustapha actually saved. He finally slid one in at the back post before Khazri got his from substitute Hamid Naguez’s cross.

Belgium had made their point – they have the goals in them, although the game against England is not shaping up to be the high-stakes decider it might have been.