TREND NEWS
Home Sports Ghana Black Stars will play Ethiopia but they are bottom in Group F with three points, trailing group leaders Kenya and Ethiopia who have seven points and four points respectively but with two games less.

Ghana Black Stars will play Ethiopia but they are bottom in Group F with three points, trailing group leaders Kenya and Ethiopia who have seven points and four points respectively but with two games less. 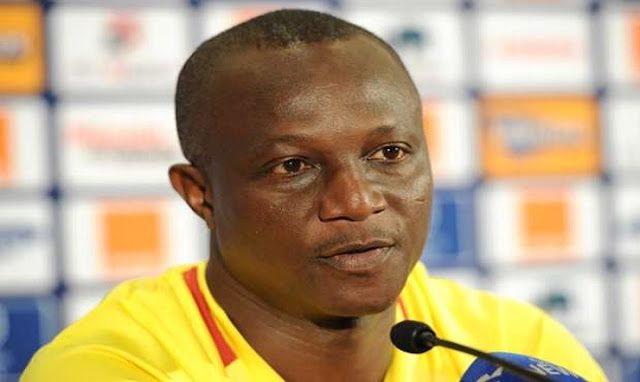 James Kwesi Appiah, also known as Akwasi Appiah, is a Ghanaian football coach and former player. He became manager of Ghana in 2017.

The Black Stars will play Ethiopia but they are bottom in Group F with three points, trailing group leaders Kenya and Ethiopia who have seven points and four points respectively but with two games less.

Ghana’s Black Stars have finally opted to camp in Naivasha, Kenya, ahead of their penultimate AFCON 2019 qualifier against Ethiopia in Addis Ababa on November 18.
A source close to the senior national team confirmed to the Graphic Sports last Saturday the team’s plans for the Ethiopia clash, as well as the return of the Ayew brothers, Andre and Jordan, to the national team after a year’s hiatus.

The source explained that the Stars’ technical handlers settled on the resort town of Naivasha, which is 76 Km from the Kenyan capital of Nairobi, due to the first class facilities there.

On September 8, the Stars lost 0-1 to Kenya’s Harambee Stars in a group qualifier at the Kasarani Stadium in Nairobi.

The source pointed out that despite Kenya’s interest in the AFCON qualifiers, the Stars handlers considered Naivasha as the ideal camping ground because it had a similar high altitude just like Ethiopia.

Coach Kwasi Appiah and his players are expected to assemble at their familiar camping base at least five days before the crucial game against Ethiopia, whom they walloped 5-0 in the opening AFCON qualifier in Kumasi on June 11, 2017.

Another refreshing news is the much-anticipated return of the Ayews who last featured for Ghana on September 1, 2017.

Andre, who is on loan at Turkish side Fenerbahce, and younger brother, Jordan, of Crystal Palace, skipped a crucial Russia 2018 FIFA World Cup qualifier against Congo in Brazzaville on grounds of ill-health.

Their action was viewed as a lack of commitment to the team and put them on a collision course with Coach Appiah, who opted to stick with the group of players who stood with him in those difficult times.

Since then, the relationship between Appiah and the Ayews has been nothing but acrimonious until recently when the coach spoke with the two players on telephone prior to the botched Sierra Leone qualifier last month.

According to the coach, the days where players merely walked into the national team to pick up jerseys, or cherry-picked matches they wanted to feature in, were over as he was bent on ensuring stiff competition for every position.

The return of Andre and Jordan is expected to sharpen the Stars attack as they join teammates such as the captain Asamoah Gyan, Emmanuel Boateng, Abdul-Majeed Waris, Raphael Dwamena and Richmond Boakye-Yiadom to provide the coach with a lot of options to select from.

Andre has been on target twice for Fenerbahce this season in the Turkish Super Lig, while Jordan is yet to find target for Palace in the English Premiership.

Ghana are bottom in Group F with three points, trailing group leaders Kenya and Ethiopia who have seven points and four points respectively but with two games less.