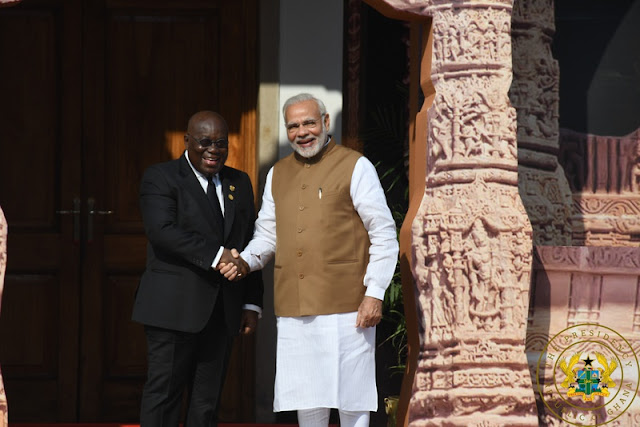 The President of the Republic, Nana Addo Dankwa Akufo-Addo, has pledged the commitment of his government to increasing the contribution of the solar energy to the country’s energy-mix.

Despite an abundance of sunshine in Ghana, with many parts of the country enjoying high levels of solar irradiation (5.524 kwh/m2/day), all year round, President Akufo-Addo noted that solar energy only contributes 1% to the energy mix, as opposed to 59% from fossil fuels, and 40% from hydro.

“On the basis of my country’s specific needs, Government is keen on developing utility-scale solar energy projects, as well as accelerating the development of mini-grid solutions in off-grid and island communities for lighting, irrigation and other economic activities,” President Akufo-Addo said.

To this end, and in keeping with Ghana’s commitments under the Paris Agreement, the President outlined some solar energy programmes for implementation by 2030, which include the attainment of utility-scale solar electricity from about 22.5 megawatts to 250 megawatts.

Additionally, the President stated that 200,000 solar systems for households, commercial and government facilities in urban and selected non- electrified rural communities will be installed, as well as the establishment of 55 mini-grid electrification systems with an average capacity of 100 kilowatts.

These systems, he stressed, will be based on solar PV technology, which will be hybridized with other generation options to serve islands and off-grid communities.

The deployment of two million solar lanterns to replace kerosene lanterns, currently being used by our rural non-electrified households, the President assured, will be done.

President Akufo-Addo made this known on Sunday, 11th March, 2018, at the Founding Conference of the International Solar Alliance, held in New Delhi, the capital of India.

A major strategy to achieving these targets in Ghana, the President told the gathering, is to build the relevant domestic capacity in the manufacture and assembling of solar energy systems and accessories within Ghana.

“This will also help create job opportunities for our vibrant and hardworking youth. Ghana is a haven of peace and security. My government is keen on building the most business-friendly environment for investment, especially for investment in the renewable energy sector,” the President said.

He continued, “Our country is endowed with great potential, where security and the rule of law are upheld, where investments are secure, and, by the end of the year, we are projected to be the fastest growing economy in the world.”

President Akufo-Addo attended the International Solar Alliance Summit at the invitation of the Prime Minister of India, Narendra Modi, and the President of the French Republic, Emmanuel Macron.

The Summit, which was attended by 25 Heads of State and Government, provided a dedicated platform for co-operation amongst solar resource rich countries, aimed at realising “the common goals of increasing the use of solar energy in meeting the energy needs of ISA member countries in a safe, convenient, affordable, equitable and sustainable manner.”

In his remarks, President Akufo-Addo noted that “the establishment of the International Solar Alliance, in our view, is very appropriate in today’s circumstances. That is why Ghana did not hesitate in ratifying the framework agreement of this noteworthy Alliance.”

He was confident that “together, we can ensure the satisfactory performance of the ISA Framework Agreement, and, thereby, make the laudable objectives of the International Solar Alliance reality.”