kira Nishino is a lucky man indeed. Unconvincing, barmy and lucky. Maybe the stifling heat in Volgograd had got to the Japan coach? How else to explain his thought process?

Nishino rolled the dice not once, but twice here in a fog of muddled thinking and, in the end, was only spared total humiliation back home courtesy of the fair play rule. No one, least of all his players, could quite fathom his decision to make a raft of bewildering changes with everything still to play for against Poland. And no less bemusing was his insistence that Japan run down the clock for the final 10 minutes of the match amid a cacophony of boos inside the Volgograd Arena, despite the knowledge that a second Poland goal or a Senegal equaliser against Colombia would have sent his team crashing out.


Get the logic? No, nor do I. Japan were heading out after falling behind to Jan Bednarek’s volley shortly before the hour mark and, at that point, Nishino looked like a ghost. It was possible to tell just by looking at that deeply worried expression on his face that he knew he was heading for an almighty fall if something did not give. And then Colombia came to the rescue, or rather the towering figure of Yerry Mina did.

The 6ft 5in defender’s winning goal against Senegal may just have earned him a place on Nishino’s Christmas card list. It also helped that the lamentable Robert Lewandowski missed a glorious chance to double Poland’s lead right before Mina spared Nishino’s blushes. The Bayern Munich striker might be on the Christmas card list, too. 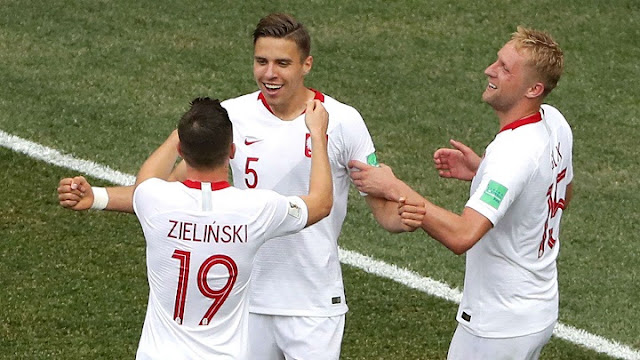 Jan Bednarek scored the only goal of the game Credit: Getty images

With the same points, goal difference and goals scored as Senegal, Japan went through by virtue of having two fewer yellow cards than their opponents. It was the footballing equivalent of heading straight past Go in Monopoly and avoiding being sent directly to jail. Japan’s prize is not £200 in this instance but a place in the last 16.

Japan have their weaknesses, and a madcap coach, but their next opponents should, at the very least, know that their next opponents have lived a charmed life so far in Russia. They played against ten men for 87 minutes in their opening 2-1 win against Colombia after Carlos Sanchez’s red card for handball and got away with an awful goalkeeping error from Eiji Kawashima in their 2-2 draw against Senegal. Now this.

Japan needed a point before the game to guarantee their progress but Nishino elected to rest six players who started against Senegal, including his four scorers in the tournament, star players Takashi Inui and Shinji Kagawa and captain Makoto Hasebe.

Although indebted to a fine save from Kawashima to keep out a header from Kamil Grosicki in the first half, Japan were in control and had spurned chances of their own to score. Then Poland exposed Japan’s weakness at defending set-pieces, Bednarek volleying home Rafal Kurzawa’s free-kick from inside the six-yard box and Nishino really would have been sweating in Volgograd’s 100 degree heat had Lewandowski not ballooned Grosicki’s pinpoint cross over from close range.

But no sooner had Lewandowski blazed over, Colombia scored and Japan had a foot back in the last 16. And Nishino’s reaction? To send on Hasebe with the instruction to settle for what they had, even though there were no guarantees it would be enough.

“When I put on Hasebe I told him what was in my mind: ‘Do not go for any high risks.’ I told him not to concede any yellow cards, go 4-1-4-1, defensive, and then I told him to tell the team to ‘stay put’. And we went through. Therefore it was perhaps the right decision by me and for the team.” Talk about gambling with a country’s fortunes.