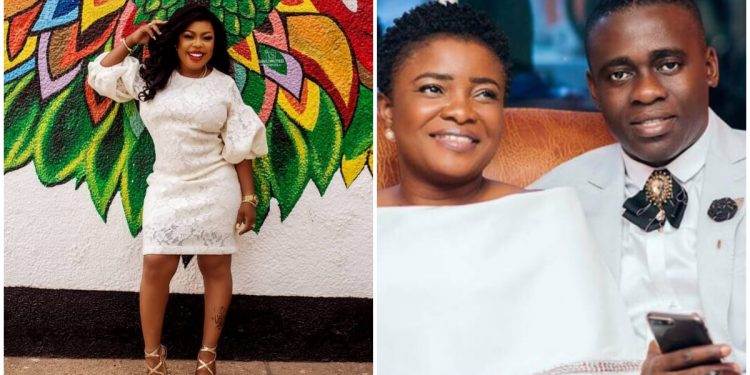 Ghanaian contemporary gospel singer, Ohemaa Mercy has surfaced the social media with the alleged discovery of not ever receiving a brand new car from husband as a birthday gift.

The husband, Isaac Twum Ampofo was believed to have given her a car as her birthday gift in September last year.

According to Afia Schwarzenegger, it is alleged that the couple’s marriage has been set on the verge of collapse for almost a year. Rumor also has it that a day before her Tehillah Experience, Ohemaa Mercy caught her husband sleeping with one of her backing vocalists.

Afia Schwarzeneggar reported via her youtube Channel; SchwaTv, that the ‘birthday car gift’ was all for a show and it was from a friend of the husband who is a car dealer.

Ohemaa Mercy in her defense claims that she has never cheated with any man on her husband before rather the husband has cheated on her with her backup singer.

Reports also have it that the non-musician husband of Ohemaa Mercy went ahead to register Tehillah Experience, has confiscated her social media accounts, and forbidding Ohemaa Mercy from even entering her own house let alone see her children.

Perhaps, we shouldn’t miss Ohemaa Mercy so much for being absent from social media for a while. She is active somewhere else.

Ohemaa Mercy is believed to have been evicted from her house in August last year, as the couple separated upon her husband’s infidelity episode.