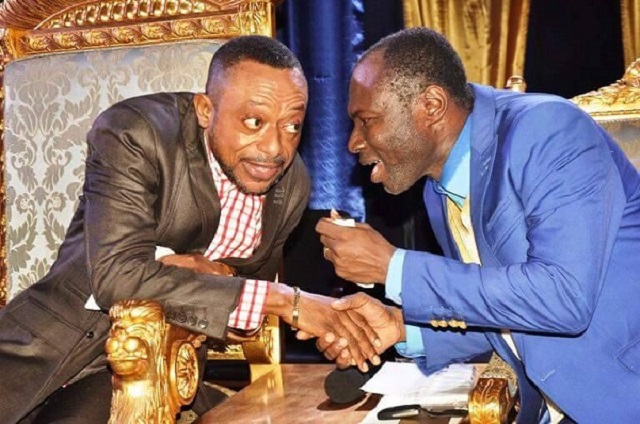 Rumours were rife on social media that Reverend Owusu Bempah and his third wife who married barely eight months ago have gone their separate ways following some misunderstandings between the couple.

Reacting to these, Rev. Owusu Bempah rubbished the reports indicating his marriage is intact.

He claims the Founder and Leader of the Glorious Waves Chapel International contracted one blogger, Baba Tunde to fabricate and spread lies about his (Owusu Bempah’s) marriage in order to expose him to public ridicule.

“I’ve not divorced my wife. We’re together.

I heard about this divorce report coming from a gentleman in Badu Kobi’s church.

He was asked by Badu Kobi to write that on social media to disgrace me.

He said my 5-month-old marriage is broken down so people should come and learn divorce from me.

We’ve never had issues since we got married so I didn’t believe what I was hearing.

What at all does Badu Kobi want from me?” Rev Owusu Bempah said in an interview with Sankofa Radio.

Asked if he has evidence Prophet Badu Kobi is responsible for the rumours, Rev. Owusu Bempah said, Baba Tunde himself has confessed that he was ordered by his master to defame him (Owusu Bempah) and has subsequently apologised for his actions.

“Baba Tunde has called me and apologised. He said Badu Kobi asked him to write those things about me.

Even someone called me when Baba Tunde was in Badu Kobi’s office to write about my marriage.

I have evidence, so I’m not lying,” Reverend Owusu Bempah said.