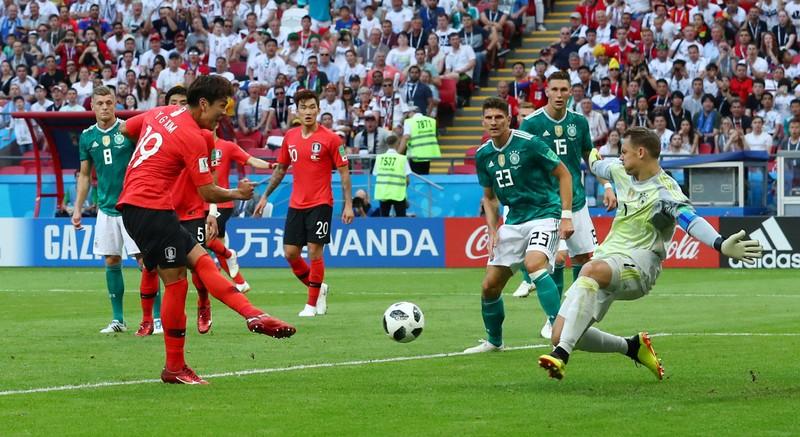 Germany had progressed past the group stage of the World Cup sixteen times in a row, but booked themselves a premature exit this year after losing to South Korea in stoppage time.

Kim Young-gwon sealed their fate with a 94th minute goal, which was initially disallowed as off-side but a VAR decision saw the decision overturned as the ball came off Niklas Süle.

Tottenham’s Son Heung-min then added insult to injury scoring a 96th minute second Korean goal.  Though South Korea do not go through to the knock-out stages, the win is the first in their history against Germany.

Germany dumped out of the World Cup by South Korea.

The opening half saw a much-changed German side, with former talisman Thomas Muller starting on the bench, performing with a lack of quality that has defined their tournament.  In the second half the world champions were better and had plenty of attacking chances but just couldn’t find the back of the net.

South Korea’s goalkeeper Cho Hyun-woo was dominant throughout, in particular denying Leon Goretzka a 48th-minute header which was on its way to the bottom left corner if not for the keeper’s quick hands.  Centre-back Mats Hummels missed an open goal header in the 86th minute in what was Germany’s best chance to grab a winner.

The result meant that Mexico survive and will progress to the last-16 despite their 3-0 loss to Sweden, who go through as the group winners.