Why Mpraeso-Kwahu Good For Easter Days

ACCRA24.COM can confirm that, one of the towns in Kwahu, considered to be the centre of Kwahu as well the mother of all the Kwahu Districts. It has the first District capital years before all the other districts were created.

Mpraeso is ruled by a section of the Akan Asona clan called the Royal Anokora Asona family.
The sitting Chief and Queen Mother are:
Nana Ampadu Daduam
Nana Abena Nkirisah.

Long Live Okwahu!
Long Live Mpraeso!!!
FaceBook Page: https://www.facebook.com/mpraeso.kwahu/
YouTube: http://www.youtube.com/user/MPRAES0
Traveling To Mpraeso In Easter Days:
Mpraeso sits on a mountain plateau about three-four hours’ drive from Accra, the capital city of Ghana. Technically African busses hold five passengers in each row. In reality they also hold an
unlimited assortment of children, tie up wings and legs of chicken or other birds or goat or sheep under the seats,
and luggage. It’s usually a tight fit.
The busses operate on “African time” and will not depart until they are filled with people and goods.

For an European it may not be comfortable ride, because of the heat, the crowd, and the bumps,
you will find yourself included in the instantaneous community of the bus.

In the bus, Some sing, others eat, while occasionally someone will stand up in front, next to the driver
and try to sell herbal medicine (the practice of the medicinal and therapeutic use of plants)
to passengers that cures every disease from how to give good sex, become fat, eat good and even cancer.

Remember, African taxi drivers takes four passengers, three back and one front.
A bad taxi driver can take four back and two front. Making a total of six passengers.
Plus the taxi driver, that means seven people will be packed in that small box of car.
If you will not go, others are ready to take. So it will be better you join the heat in the car.

You can be the best driver in Europe or America but your driving experience
can not take you through the mountainous terrain of Mpraeso-Kwahu,the climb became steeper as you drive.
There is some part of the mountain, where one needs to sign a song before the climbing becomes clear.

Remember, your driven license ends at Mpraeso-Kwahu, you need simple uneducated boy on the roadside
to take you across the mountainous road of Mpraeso-Kwahu.

Never try it and you will die before your time. There is nothing about
spirit at this modern days but the hills and valleys are not normal for driving through
because some areas look like slope, flight of stairs, or rising or falling sharply, almost perpendicular.

Some notable characters from Mpraeso, that are worthy of attention or notice. They are all ALIVE!

Mpraeso is a town and the capital of Kwahu South district, a district in the Eastern Region
of south Ghana, located at an altitude of 367 m on the Kwahu Plateau, which forms the
south-west boundary of Lake Volta. Mpraeso has a 2013 settlement population of 11,190 people.

NB: Big towns like Nkawkaw and it’s nearby towns are all Kwahu Villages, that has grown to become big municipal town in the region.

Why Mpraeso-Kwahu Is Famous?
The discovery of Bauxite near Mpraeso, announced in 1924, led to the development of
the Bauxite mining industry along the Volta River.
Mpraeso is famous for manufacturing pottery, particularly for its grinding bowls:
shallow dishes with strong, inverted rims and ridges on the interior used to grind
vegetables using a small wooden pestle.

Mpraeso, which is the capital of Kwahu South District forms part of the twenty six (26) Municipalities and Districts in the Eastern Region of Ghana. And the administrative capital of the District is Mpraeso.

The District Specifically, lies between latitude 6o 30’ N and 7o N and longitude 0o 30’ W and 1o W. It covers a total land area of 1,462km2.The District Shares boundaries with Kwahu East to the north, to the south with Kwahu West Municipal, to the east with Fanteakwa District and to the west with Asante Akim South.

Geography
The headwaters of the Pra River are near Mpraeso.

Mining
The discovery of Bauxite near Mpraeso, announced in 1924, led to the development of
the Bauxite mining industry along the Volta River.

Arts
Mpraeso is famous for manufacturing pottery, particularly for its grinding bowls:
shallow dishes with strong, inverted rims and ridges on the interior used to grind
vegetables using a small wooden pestle. 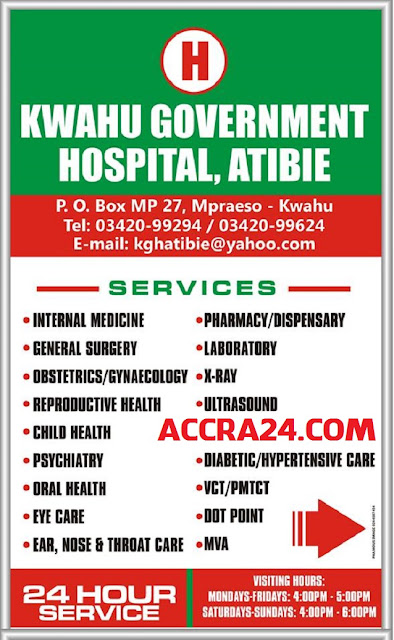