Zimbabwean pastor arrested for selling tickets to heaven for GHC 2,500

Zimbabwean pastor arrested for selling tickets to heaven for $500

It has just been reported that a clergy man in Zimbabwe, Pastor Tito Watts and his wife, Amanda, were arrested for selling tickets to heaven to church members.

According to Egypt Today, the police disclosed that he pastor and his partner scammed several people into buying the tickets for $500 (GHC2,500).

It was added that, the tickets is to get people into heaven without facing judgements.

The police further disclosed that Pastor Watts church members have called for the release of the man of God.

Watts reportedly told those who sought salvation that the tickets were made from solid gold and each ticket reserved the buyer a place in heaven.

Pastor Watts said: “I don’t care what the police say.
The tickets are solid gold… it ain’t cut up two by fours I spray painted gold.

And it was Jesus who give them to me behind the KFC and said to sell them so I could get me some money to go to outer space.

I met an alien named Stevie who said if I got the cash together he’d take me and my wife on his flying saucer to his planet that’s made entirely of crack cocaine.

You can smoke all the crack cocaine there you want… totally free.

So, try to send an innocent man to jail and see what happens.

You should arrest Jesus because he’s the one that gave me the golden tickets and said to sell them. I’m willing to wear a wire and set Jesus up.”

Amanda also disclosed that she and her husband just wanted to leave planet earth to space so they can smoke cocaine.

She added that, she did nothing as it was her husband who sold the tickets. 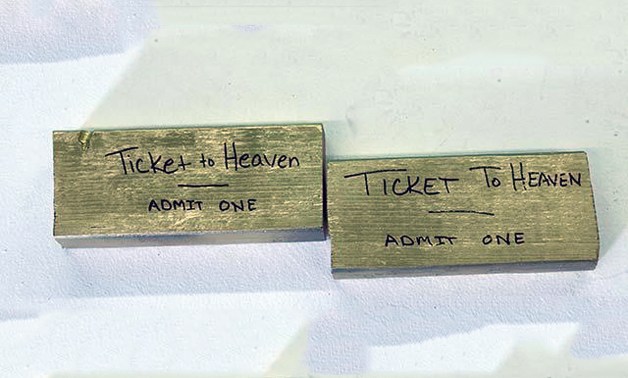 Inside Story also reported that the police seized over $10,000 in cash, five crack pipes and a baby alligator.

Adding that this is not the first time that Tito and Amanda hit the news, as in 2015, Del Woodcock,

a customer who bought the ticket from the couple knew he was scammed after discovering that he only bought a wooden ticket.

Woodcock said. “I don’t know what gold looks like.

How was I to know it was spray painted wood? I want my $99.95 back and I hope Tito and Amanda Watts get the death penalty for what they done. They deserve it.”