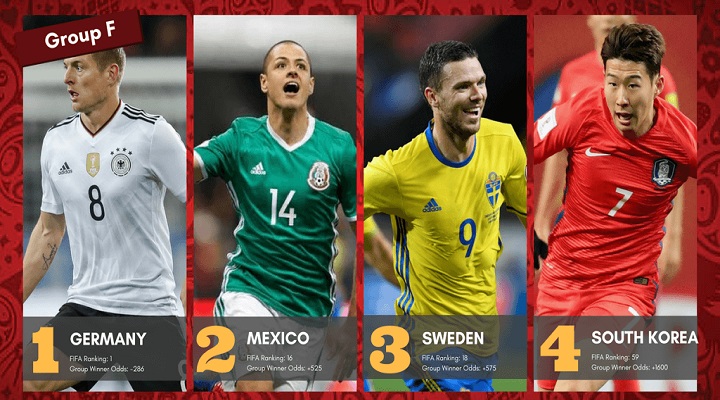 Four Global heavyweights to do battle in Group F, Group of Faith or Fail.

1. Germany
The top ranked side and defending champions shouldn’t have too many problems finishing at the summit of Group F. The Germans were ruthless in qualifying, winning all ten matches, scoring 43 goals and conceding just four. They have talented players all over the park and will be tough to beat.

Mexico were too good in the CONCACAF qualifiers and will be confident of making it through the group. The side has made it to the round of sixteen in the last six consecutive World Cups, a feat shared by only a handful of nations. They will certainly give Germany a good match, while their game against Sweden is likely to determine their progress.

You can blame Sweden for the fact that both the Netherlands and Italy are no-shows at the 2018 World Cup; the Netherlands finished below them and France in their European group, while Italy of course failed to score in their playoff and are staying home for the tournament for the first time in 60 years. Sweden and Mexico are the obvious candidates to challenge Germany in this group, and you can make a case for both sides. One may argue that the quality of Sweden’s opposition throughout qualifying was better than Mexico’s, meaning they are more likely to overcome tough opponents, although we believe in a matchup between the two teams the Mexicans will win.

There’s not too much to be said about the South Koreans, who shocked the world by making it to the semi-finals as hosts of the 2002 tournament. We can’t see them gaining a point in this group.