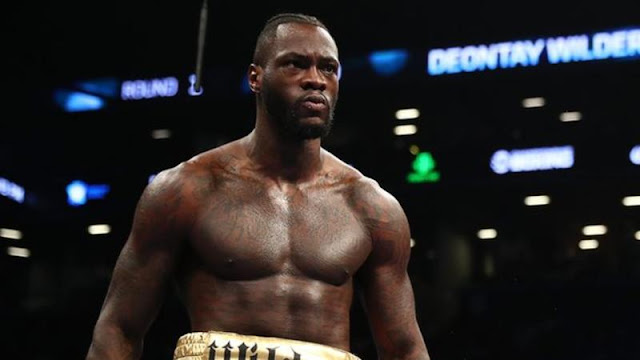 Wilder is unbeaten in 40 professional fights, with 39 knockouts

Anthony Joshua is “afraid” to
fight Deontay Wilder, says fellow heavyweight Tyson Fury, but he thinks
the bout will happen at some stage.

Britain’s Joshua has been ordered by the WBA to face Russia’s Alexander Povetkin, delaying a potential unification fight with American Wilder.
The WBC champion called Joshua – who also holds the IBF and WBO belts – and his promoter Eddie Hearn “cowards”.

“Wilder is all wrong for Joshua and Eddie Hearn knows that,” said Fury.
Any
bout between Joshua, 28, and Wilder, 32, would see the winner become
the first man in history to hold all four heavyweight world titles.

Hearn
has previously said there was always the risk of either the WBA, IBF or
WBO forcing Joshua to face one of their mandatory challengers.

He
also claims to have sent a contract to Wilder’s team last week and on
Tuesday said his fighter was “frustrated” over delays in agreeing a deal
with Wilder.

Former world heavyweight champion Fury, who held the
IBF, WBA and WBO titles, made his comeback after a 32-month absence
earlier this month.

The 29-year-old Briton will fight again on 18 August and says he is “preparing” to face Joshua and Wilder.
“Hearn wants Joshua to get a few more fights in before he gets chinned by Wilder,” Fury said in a post on Instagram.

“I
think it will happen, but Joshua will have to have a couple of more
fights to make a few quid while he can and then he will do the fight.”