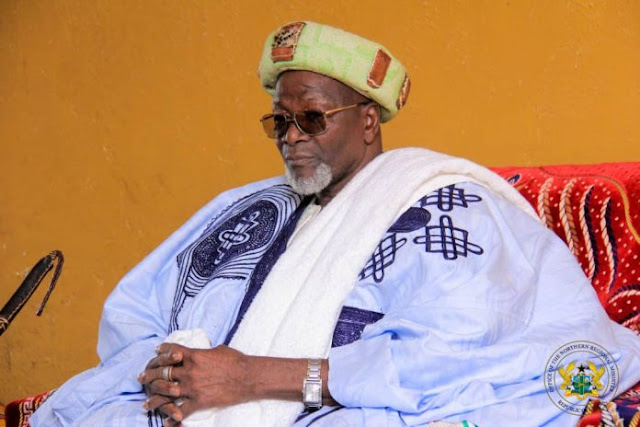 The Chief of Savelugu and Leader of the Andani Royal Family, Yoo Naa Abukari Mahama has been chosen as new Ya Naa.

The new Yaa Naa is more than 70 years.

Below are details of how the selection is done

The elders responsible for the selection would meet the Gushie-Na at Sakpiegu, north of Yendi, and confer with him about the succession.

The decision they reach would be communicated to the principal divisional chiefs in line for Yendi and the approval of these chiefs was sought indeed, it was essential if the new king was not to become involved in civil war.

The Gushie-Na then proceeded to Yendi where he rode ceremonially three times around the burial chamber and then entered it, to emerge demonstrating grief.

His action was regarded as the final declaration that the previous reign was over and that the regency was also at an end.

From the burial chamber, the Gushie-Na went to the royal court {yili bla). Here, after a
symbolic display of resistance by the royal bodyguard, the Gushie-Na seized
three pieces of straw from the palace roof and handed one to the successful candidate.

Then the Gushie-Na left Yendi, custom forbidding him to spend the night in the town after indicating the identity of the new king.

Subsequently, the new Ya-Na was led to the house of an elder, Zohe-Na, where he was formally kept as a ‘prisoner’ for a week, during which period Kuga-Na ruled the state. After another few days’ staying with Mbadugu (the king’s linguist), the Ya-Na was taken to the court where Muslim prayers were said and homage was paid by other chiefs and by commoners, the king sitting on the lion skin of a Ya-Na.