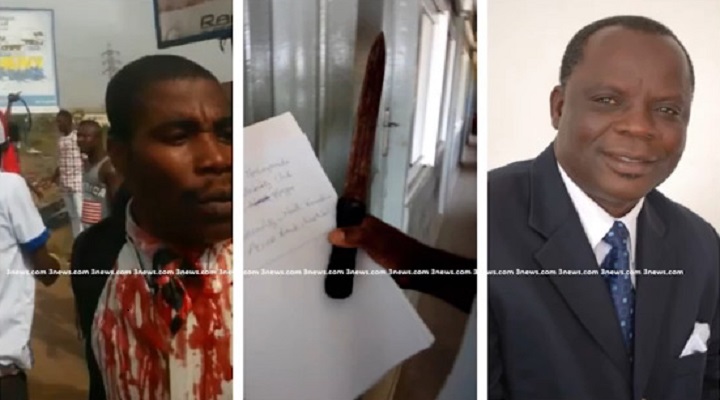 The 31-year-old man arrested for allegedly killing the head pastor of the Assemblies of God Church at Tema Community four has admitted the offence but justified same, claiming the pastor had targeted him for rituals.

The man who was arrested Sunday morning with alcohol, turpentine, matches, a knife and a machete, claimed the pastor, Rev David Nabegmado, who is his uncle, is not a true “man of God” because he has been “worshiping lesser gods”.

“He’s sacrificed all the family and destroyed everybody; he was worshiping a god in the house when he was killing the family. I have to go and bring these gods to the house to protect the house.

Then he sacrificed the church members two or three in a year,” he alleged after his arrest.

According to him, he had planned to burn the alleged deity of Rev Nabegmado after killing him in his office at the church premises Sunday morning just before he stepped into the auditorium to deliver his sermon.

Listen the suspect confess to the crime and giving reasons for the murder.

Meanwhile, the Tema Regional Police Command says it has started investigations into the case, noting witnesses have already given their statements.

It said personnel have been dispatched to the house of the deceased as well as the church premises to ensure security.