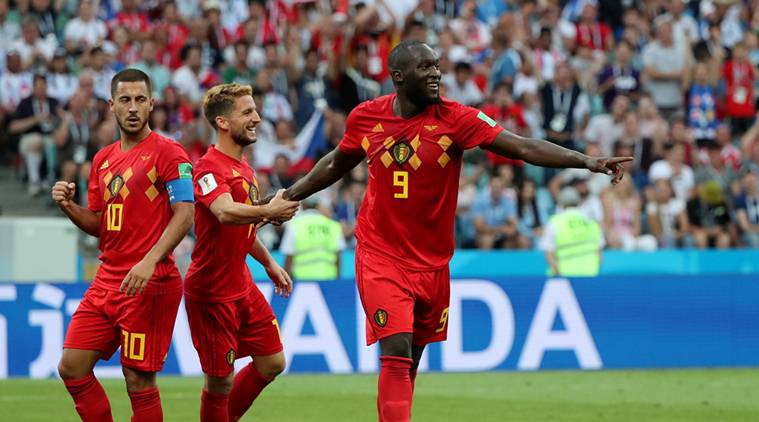 Romelu Lukaku scored twice as Belgium proved too good for World Cup debutants Panama in the opening match in England’s Group G. After a goalless first half, Belgium, ranked third in the world, finally broke Panama’s resistance when Dries Mertens steered in a spectacular volley.

Panama, 55th in the rankings, had a chance to snatch an equaliser but Thibaut Courtois was quick off his line to save Michael Murillo’s shot with his legs.

Manchester United striker Lukaku made certain of the victory as he scored with a diving header after an exquisite pass from Manchester City’s Kevin de Bruyne with the outside of his boot.

Lukaku then added a third with a chipped finish after a fine through ball from Chelsea’s Eden Hazard.

Belgium take on Tunisia in their second match on Saturday, 23 June (13:00 BST), before Panama are England’s second opponents a day later (13:00 BST).

Gareth Southgate’s side play their first game of the tournament later on Monday against Tunisia in Volgograd (19:00 BST).

‘Moment of magic’ – Mertens volley sets up Belgium win Belgium, who included seven British-based players in their starting line-up, scored 43 goals in qualifying, a joint record for a European team, but suffered a frustrating first 45 minutes in Sochi.

Panama’s goalkeeper Jaime Penedo denied Yannick Carrasco, Mertens, Hazard and Lukaku in the opening 40 minutes as the Central Americans battled hard to try to contain one of the World Cup favourites.

The Europeans also failed to capitalise on two Panama errors when Hazard shot into the side-netting after a short Roman Torres backpass, before Mertens also missed the target when allowed to shoot from a quickly-taken short corner.

The opening matches at the World Cup have seen Brazil and Argentina both draw their first games, with holders Germany losing to Mexico.

But Belgium ensured there would be no upset at the Fisht Stadium as Mertens took advantage of Panama failing to clear their lines with a superb volley over Penedo.

They had a chance to double their lead as De Bruyne curled a free-kick wide before Lukaku dived in to score from the Manchester City midfielder’s pass and settle any nerves.

Six minutes later Lukaku grabbed his second and Belgium’s third with a composed finish over the advancing Penedo.

Panama fail to get the goal their fans craved

Lukaku doubles Belgium’s lead A national holiday was declared after Panama sealed qualification in October and their fans, who outnumbered those from Belgium, created a fantastic atmosphere, cheering every time their team crossed the halfway line.

The emotion of the occasion was shown with captain Roman Torres, whose goal took Panama to Russia, in tears as the national anthem played before kick-off.

Torres, part of Panama’s back five, did superbly to make a last-ditch sliding challenge to deny Lukaku a tap-in from De Bruyne’s cross in the opening half.

Eric Davis shot over and the Panama fans were dreaming of an upset as their side held out throughout the first half.

However, with the Central Americans tiring, Belgium’s extra class and fitness levels told after the break.

The Panama fans were denied the goal they so desperately craved as Murillo could not steer his shot past Courtois and Fidel Escobar’s late free-kick was comfortably held by the Chelsea goalkeeper.

Nevertheless, Panama’s fans, players and management can be proud of the determined effort.

They now need to get something against England on Sunday in Nizhny Novgorod or they will be facing an early exit from their first World Cup.

Romelu Lukaku has been directly involved in 13 of Belgium’s last 19 goals (11 goals, two assists). He now has 38 goals in 70 games for Belgium and is his country’s record goalscorer More second-half delight for Belgium – the stats

‘They could have won by a landslide’ – what they said

Belgium coach Roberto Martinez: “We started very well for the first 10 to 15 minutes, then Panama become effective with their defensive structure and we got a bit anxious.

“But I’m delighted in the way we reacted as a team – everyone was committed to keep a clean sheet and in the second half it was about finding a bit of composure in front of goal. We couldn’t be prouder of the team.

“It was a great goal from Dries Mertens and that gave us some breathing space. From that point on we were more ourselves and more in control.

“Panama gave an incredible amount of effort but it is difficult to maintain that for more than 45 minutes, and my players deserve huge credit for the way we played for 90 minutes.”

Belgium striker Romelu Lukaku: “As a team we know we have a lot of players with qualities. We were ready today and need to be ready for the next game as that will be more difficult than this one.

“I’m not thinking in personal terms – the most important thing is the team. I want to help my team-mates as much as possible.”

Panama coach Hernan Dario Gomez: “It would have been terrible if they had scored more. No-one likes losing but considering our opponents and our history it is a normal result and they could have scored more.

“It is not a positive result, but they could have won by a landslide and there were people that thought we would lose by seven goals.

“I told them we played with dignity. We are not as fit as the European players. We will keep growing and learning.”

On Panama’s five yellow cards: “We are a very organised team, we play tactically and sometimes our players look a bit tough, but other teams are also tough and physically strong.

“We never have the intention to be tough but they are strong men. We do not try to hurt anyone – we have good intentions.”