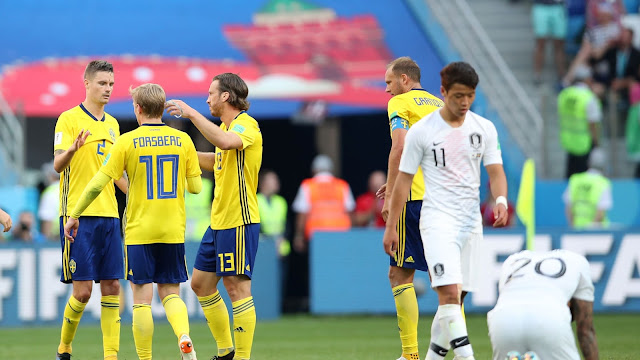 Sweden marked their first appearance in the World Cup for 12 years by beating South Korea thanks
to a penalty from captain Andreas Granqvist that was awarded after a video assistant referee (VAR) review. There was a short delay for Kim Min-woo’s foul on Viktor Claesson to be analysed on video and for the referee to point to the spot but it did not affect Granqvist, who sent goalkeeper Cho Hyun-woo the wrong way.

Sweden, who join Mexico at the top of Group F on three points, created the better chances in Nizhny Novgorod.

Marcus
Berg should have scored midway through the first half but his close
range shot was beaten away by Cho, while South Korea did not manage a
single shot on target.

In a scrappy game, Cho also saved well from Ola Toivonen’s header following a free-kick.
South
Korea, competing in their ninth successive World Cup, were
disappointing and the closest they came to scoring was when Hwang
Hee-chan headed wastefully wide in the closing moments.
The result
means Mexico, 1-0 winners over world champions Germany on Sunday, and
Sweden have a three-point lead at the top of Group F after the first
round of matches.
enrik Larsson in 2002 against Nigeria

Sweden
reached Russia by beating France in a group game on the way to
finishing above the Netherlands in the table and reach the play-offs,
when they overcame Italy.
However, they arrived in Russia without a
goal in their previous three matches and without Zlatan Ibrahimovic
after his retirement from international football.

Indeed, Janne
Andersson’s team looked to be heading for a goalless draw until the
second-half penalty – the seventh spot kick to be awarded at the
tournament.
There was little doubt about the validity of the
penalty as replays showed Claesson, who plays his club football in
Russia, was clearly caught.

Granqvist, 33, kept his nerve to
become the oldest player to score on his World Cup debut since Martin
Palermo, who was 36 when he netted for Argentina in 2010.
In doing so it meant the proportion of the 26 goals scored so far at this World Cup from the penalty spot rose to 19%.

It was however a gritty rather than spectacular performance from the
Swedes, who lost Manchester United centre-back Victor Lindelof on the
morning of the game due to illness.
His place was taken by Pontus Jansson but the Leeds United defender had little to do against lacklustre opponents.

Jansson
wasted a chance to make an impression at the other end of the pitch
when he rose unmarked at a corner but headed straight at the keeper.
With world champions Germany – smarting from their opening-game defeat – up next, this was a vital win for Sweden.

South
Korea did not win a game at the 2014 World Cup and they now face a
battle to qualify from a tough group after this lacklustre performance.
Having
qualified by finishing second behind Iran in a six-team group, they
were hoping to at least match their efforts of 2010 when they reached
the last 16 in South Africa.
But this was a lethargic display and their failure to test keeper Robin Olsen will be a big concern for boss Shin Tae-yong.
After an impressive season with Tottenham, Son
Heung-min would expect to make a mark in Russia but he was largely
anonymous other than one impressive run in the first half.
Only when they fell behind did South Korea add some much needed urgency into their play.
However, their day to forget was summed up when the unmarked Hwang headed wide from eight yards.

South Korea would have lost by a wider margin but for Cho Hyun-woo, whose save to deny Marcus Berg from close range was sublime

‘We need to dare to do even more’ – what they said…

Sweden coach Janne Andersson:
“I felt the wait for the VAR was unnecessary. There was no doubt that
the penalty should have been called straightaway. Luckily the referee
had VAR to help him to be able to make the right decision.
“Today’s
match was so much more important to win after Germany lost. But we were
focused on winning the game anyway. The opportunities for us now going
forward are so much better.
“Germany are the ones faced with a
dilemma. We are going to prepare in the best way possible and then we’ll
see. We need to dare to do even more.”

Turning the clock back 60 years – the stats

Sweden
face Germany in Sochi on Saturday 23 June (19:00 BST) while South Korea
play at 16:00 on the same day against Mexico in Rostov-on-Don.