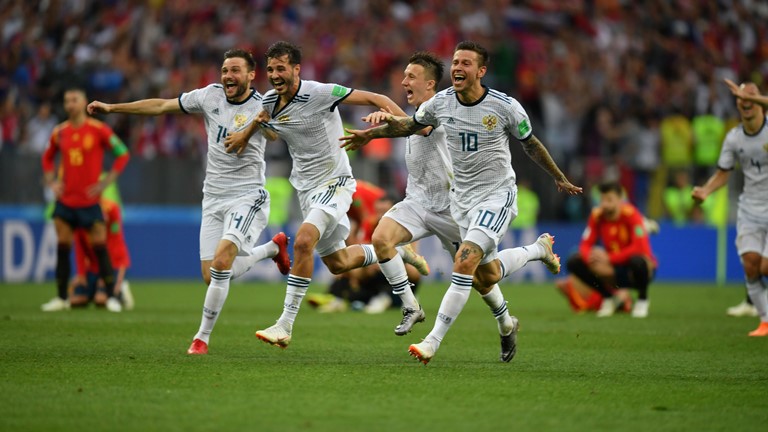 In a match where Spain enjoyed 79 per cent of possession, not even the positive impact of another stand-out performance from Isco could break down the Russia defence to give Spain the easy win many had predicted.

Two saves from Igor Akinfeev in the penalty shoot-out gave the hosts the 4-3 win.

The match still started well for Spain. Russia seemed overwhelmed by the occasion for the first time this tournament, in this their first knock-out stage match at a World Cup since Mexico 1986.

The first goal highlighted this quality discrepancy early on, as abysmal Russia defending gave Spain the lead. Sergei Ignashevich seemed more concerned by bulldozing Sergio Ramos down in the six-yard box than defending the Spain corner, and with his back to the ball accidentally clipped it over the line to put Russia behind in the 11th minute.
Spain’s Sergio Ramos was fouled by Russia’s Sergei Ignashevich, who directed the ball into his own net.

But some counter-attacking from Russia late in the half gave paid off, as a Russia corner turned into a penalty thanks to Gerard Pique’s flailing arm catching the ball in the air.

Russia coach Stanislav Cherchesov couldn’t even bear to watch, turning his back on the action as the weight of the country’s expectations fell on Artem Dzyuba’s shoulders.

But you wouldn’t have guessed it, as the striker coolly slotted the penalty into the bottom-left corner of the goal in the 41st minute to the delight of the home crowd’s booming cheers.

Spain’s frustration going into the half-time undoubtedly motivated their much more positive start to the second period – with more purposeful crossing and penetration at goal, but still struggling to create tangible goal-scoring opportunities.  Report by Molly McElwee.