Kofi Annan from (1938 – 2018) is reported dead in Switzerland, Saturday after a short illness.

Kofi Annan was born in the Kofandros section of Kumasi in the Gold Coast (now Ghana) on 8 April 1938. His twin sister Efua Atta, who died in 1991, shared the middle name Atta, which in the Akan means ‘twin’.

Where did Kofi Annan go to school?

He is said to have died in Switzerland, Saturday morning after a short illness.
Hence, we at OFM Computer World Group of companies, join the world in mourning the loss of a Peacemaker and a great World leader of our time @kofiAnnan.

Kofi Annan, a leading states-person of our times, He will be greatly missed.
When you were 19, Ghana became the first Africa Nation to achieve its independence. At 80, you have grown to become the gold standard for international leadership; successfully mediating conflicts and ending violence.

Thanks for your dreams for Africa. A month ago you told us “If you don’t dream, you won’t even begin to do it. But you’ve to be careful; you must know when you’re dreaming when you’re asleep or when you’re awake” Stay woke forever! 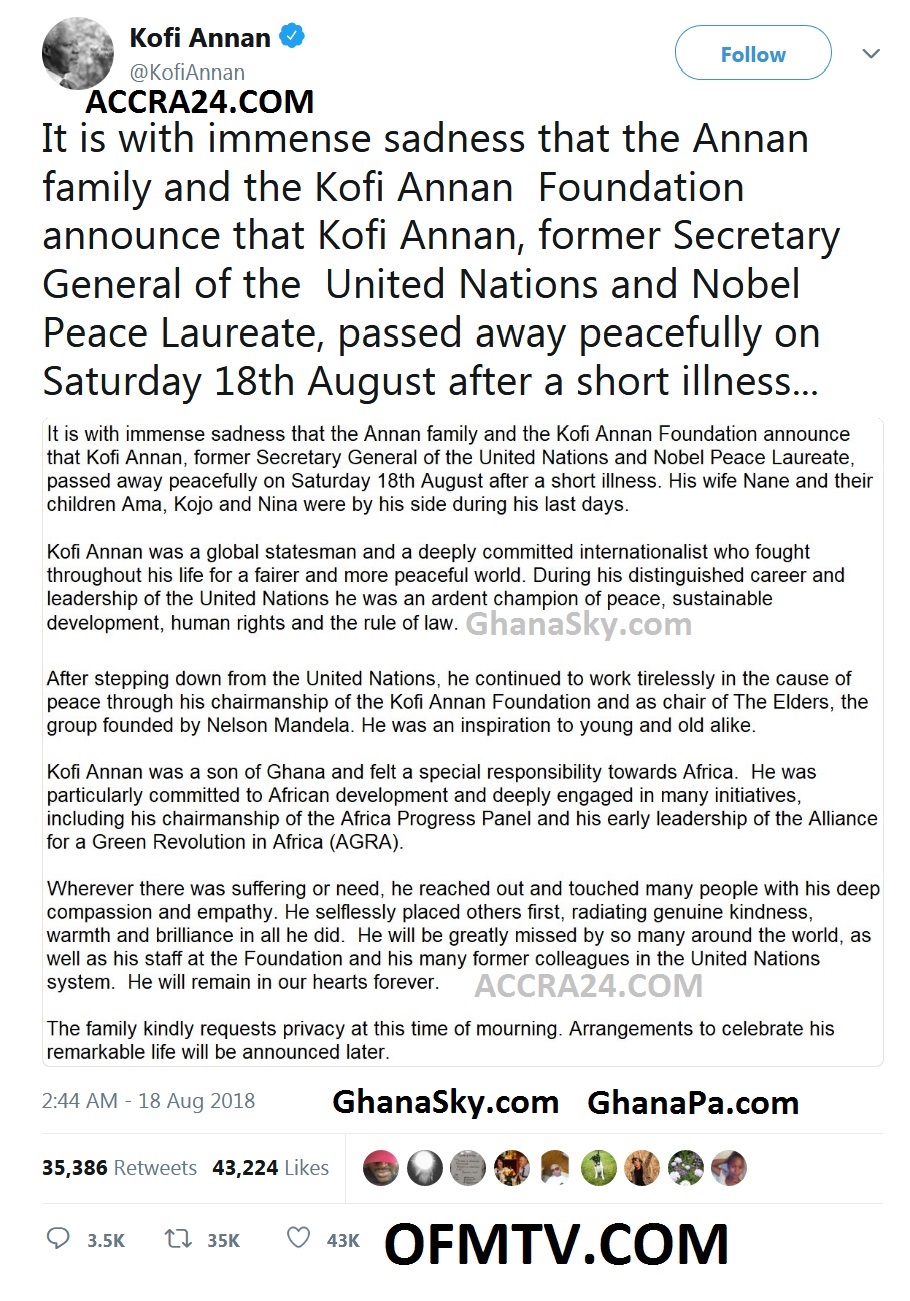 Most noteworthy, Kofi Atta Annan was born in Kumasi on April 8, 1938. Since 1960 Ghana has been a republic within the British Commonwealth, a group of nations dependent on Great Britain.

Named for an African empire along the Niger River, Ghana was ruled by Great Britain for 113 years as the Gold Coast. Annan is descended from tribal chiefs on both sides of his family.

Because his father was an educated man, and Annan became accustomed to both traditional and modern ways of life. He has described himself as being “atribal in a tribal world.”

After receiving his early education at a leading boarding school in Ghana, Annan attended the College of Science and Technology in the capital of Kumasi.

At the age of twenty, he won a Ford Foundation scholarship for undergraduate studies at Macalester College in St. Paul, Minnesota, where he studied economics.

Even then he was showing signs of becoming a diplomat, or someone skilled in international relations. Annan received his bachelor’s degree in economics in 1961.

Shortly after completing his studies at Macalester College, Annan headed for Geneva, Switzerland, where he attended graduate classes in economics at the Institut Universitaire des Hautes Etudes Internationales.

Following his graduate studies in Geneva, Annan joined the staff of the World Health Organization (WHO), a branch of the United Nations.

He served as an administrative officer and as budget officer in Geneva. Later UN posts took him to Addis Ababa, Ethiopia, and New York City, New York.

Annan always assumed that he would return to his native land after college, although he was disturbed by the unrest and numerous changes of government that occurred there during the 1970s.

Annan became the Alfred P. Sloan fellow at the Massachusetts Institute of Technology.

Rather than return to Ghana upon graduation, he accepted a position at the UN headquarters in New York City.

Work with the UN

In 1974 he moved to Cairo, Egypt, as chief civilian personnel officer in the UN Emergency Force.

Annan briefly changed careers in 1974 when he left the United Nations to serve as managing director of the Ghana Tourist Development Company.

Annan returned to international diplomacy and the United Nations in 1976.

He returned to the UN headquarters in New York City in 1983 as director of the budget in the financial services office.

Later in the 1980s, he filled the post of assistant secretary-general in the Office of Human Resources Management and served as security coordinator for the United Nations.

In 1990, he became assistant secretary-general for another department at the United Nations, the Office of Program Planning, Budget, and Finance. In fulfilling his duties to the United Nations, Annan has spent most of his adult life in the United States, specifically at the UN headquarters in New York City.

Annan had by this time filled a number of roles at the United Nations, ranging from peacekeeping to managerial, and the 1990s were no different.

In 1990 he negotiated the release of hostages in Iraq following the invasion of Kuwait.

Almost, he began serving his four-year term of office on January 1, 1997. Joining him was his second wife, former lawyer Nane Lagergren of Sweden.

Even more, she is the niece of the diplomat Raoul Wallenberg (1912–c.1947), who saved thousands of European Jews from the German Nazis during World War II (1939–45), when American-led forces fought against Germany, Italy, and Japan.

Kofi Annan married in 1985 and he had only one child.

Annan in a new world

Above all, In the summer of 2001, the United Nations unanimously appointed Kofi Annan to his second five-year term as secretary-general.

Finally, the Nobel citation pointed out that Annan had brought new life to the peacekeeping organization, highlighted the United Nations’s fight for civil rights, and boldly taken on the new challenges of terrorism and acquired immune deficiency syndrome (AIDS; a disease of the immune system).