Mama Pat, The New Hope To Lead The NPP Women’s Wing In The Brong Ahafo Region 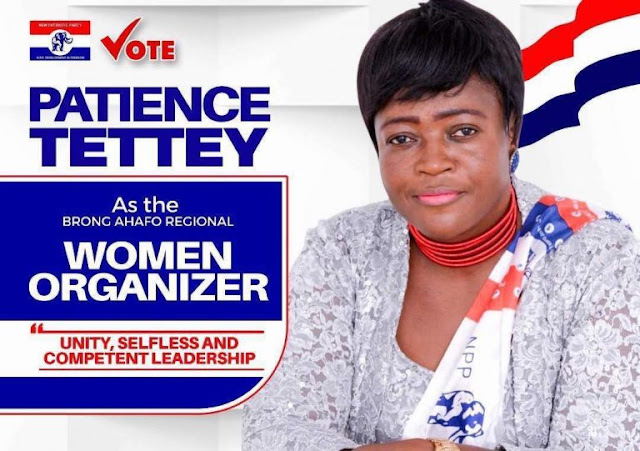 Born Patience Asare and now Mrs. Patience Tettey. She is also popularly known as Mama Pat. Her mother comes from Goaso and her father, Dormaa Ahenkro; both located in the Brong Ahafo Region of Ghana. She holds an HND in marketing. In her professional life, she once served as the National Public Relations officer for Capital O2 from 2000-2007. She also worked with the National Investment Bank from 2007-2010 and has since been with Prime Insurance Company from 2011.

Since joining the party in 1993, her sacrifices and commitments towards the party’s growth and development in the region has been tremendous and speak volumes that cannot be quantified. Among the many roles she played in the party includes the fact that, she has been a polling agent and a polling station women organizer in the Sunyani east constituency over the last eight years. As one of the former TESCON Patrons of the Sunyani Technical University, she made very significant financial contributions towards the growth of TESCON.

She also played an integral role in raising funds for the NPP in Brong Ahafo Region during the 2008 elections and she has never relented in her efforts to campaign for our Presidential Candidate and the NPP parliamentary candidates especially in the Sunyani East Constituency. It is worthy to mention, that during election 2016, she adopted all four polling stations in her electoral area and has been an ardent financier of the party. No wonder lots of women massed up at the party’s office when she picked up her nomination form, for in Mama Pat, the Women of Brong Ahafo have found a new, reliable HOPE!

Mama Pat, is affable, selfless, truthful at all times and has clearly demonstrated, that she will never disappoint the women and children of the Brong Ahafo Region. She promises to run an open and transparent administration where everyone will be a stakeholder and beneficiary of the party’s fortunes. She will not discriminate against anyone, neither will she ever campaign against NPP parliamentary candidates. She is going to set up a women’s wing office, which shall be used as centre to coordinate the activities of all constituency women organizers in the region. The office shall also serve as a database source to address the challenges of the various women groups and to equally track the progress of members.

Mama Pat is going to provide a focused and an all-inclusive leadership, where the women in NPP Brong Ahafo Region will not be unfairly treated like orphans! She is a Unifier! In Mama Pat, we have a caring mother for all.