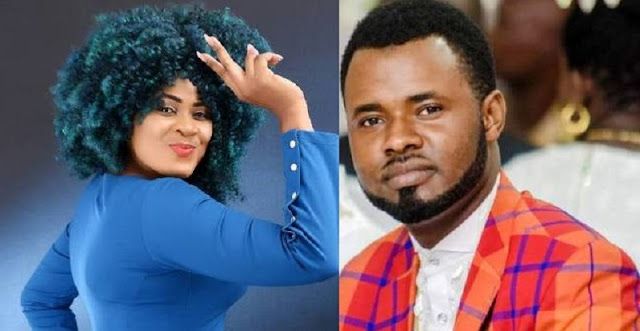 Ghanaian Gospel singer Ernest Opoku has opened up on what really happened on Monday afternoon at Adom Fm – where he received some hot lashes from his pregnant ex-girlfriend, actress Nayas 1.

Kumawood actress and Producer, Gladys Mensah Boaku aka Nayas 1 as GhanaChurch.com reported, stormed the studios of the Multimedia owned station with some canes concealed in her attire – which she used to whip the body of Ernest Opoku in revenge for his actions against her.

Opoku after lodging an assault complaint against Nayas with the police, he has now been able to speak out and has narrated what happened.

According to the Nyame Otease hitmaker, he was in the studio making a call when the lashes landed on him unawares.

“I was in the studio of Adom FM when the girl rushed in. I was even making a call and couldn’t see the lady walk in. I only realized she was present in the studio when she started lashing me severally but I didn’t retaliate,” he said.

“Ghanaians should watch her pregnancy carefully since she said she is pregnant for 3 months. I won’t lay my hands on her but I leave everything to God.”

He added that Multimedia failed woefully to protect him, especially when he was there doing a worship show for free.

“I know what Multimedia has done for some gospel artistes like myself so I don’t charge for any live worship event I attend at the reputable media firm but what happened to me yesterday was such disappointing and unpleasant.

“If Multimedia doesn’t take responsibility for this case I will be disappointed in them. Multimedia didn’t protect me… I give everything to God.” he added.