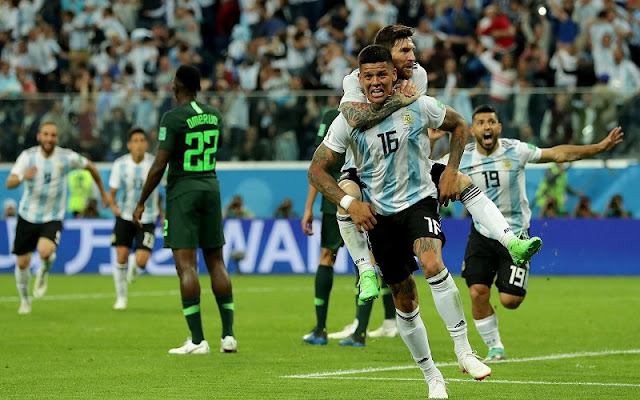 In the end it was not a Messi moment but an extraordinary volley from the
right-boot of Marcos Rojo which saved Argentina at this World Cup, which
sent them into the last-16 and which prolonged the international career of the best player the planet has probably ever seen.

Lionel Messi scored and scored a
brilliant goal but, in itself, it was not enough against Nigeria who
are out and will depart Russia with a sense of injustice and not least
because at the identity of the man who sent them out. The Manchester
United defender had already gone unpunished after catching Leicester
City’s Kelechi Iheanacho with a ridiculously high boot in the penalty
area in the first-half and Rojo survived another spot-kick appeal –
which even went to VAR after the referee Cuneyt Cakir was told to
double-check it – when he headed the ball against his own arm in the
second-half.

Then as Argentina seemed to be subsumed by their angst, by the devils
which have gripped them and the weight of expectation which has
overwhelmed them Messi intervened again. Except it was to roll a simple
pass down the right touchline for Gabriel Mercado to send in a cross.
Quite what Rojo was doing there in the first place who knows but such
was Argentina’s plight at that point – when they had lost all shape and
formation – that they needed something unlikely.

Instead of Gonzalo Higuain, instead of Sergio Aguero, who had also
come on by that stage, it was the centre-half to strike the sweetest of
volleys which tore past goalkeeper Francis Uzoho and into the net. There
were 86 minutes on the clock. Just four minutes plus injury-time to go.

That
clock was so close to ticking down but on an increasingly feverish and
desperate night in St Petersburg, a night when the city and the stadium
was turned into a fervent sea of blue and white clad, chanting
Argentinians they saved themselves and will go forward from Group D,
runners-up to Croatia, to face France, after collecting just four points
from three unconvincing performances.

When that final whistle went all control was lost. The bench exploded
onto the pitch, the players slumped in God-like prayer, including their
little God Messi, who actually stood motionless in this maelstrom deep
in his own thoughts and communications. Coach Jorge Sampaoli had also
earned his reprieve even if his influence on this squad is so damaged
that he will not remain in his post, come what may.

Even at half-time the cameras cut to the tunnel to catch Messi giving
a team-talk while the rumours were that his team-mate Javier Mascherano
had helped select the starting XI which was, in fact, the oldest ever
to appear at a World Cup with an average age of 30 years and 189 days.

It felt
like a team out of touch, out of time and out of this tournament despite
their undeniable, dervish effort. But there was only one
thirty-something who matters and Messi was not bowing out. Not now. Not
yet. This World Cup has been a brilliant festival of football but it was
lacking one thing. It was lacking Messi. And he gave it. His first-half
goal was simply beautiful in every aspect. It came as Ever Banega, one
of five changes made by Sampaoli or, rather, by the players as the coach
drowns in a sea of revolt, flighted a glorious pass forward which
picked out Messi.

The forward took it down on his thigh, as he sprinted, cushioned it
with his left-foot,  accelerated to give him sufficient space ahead of
defender Kenneth Omeruo, of Chelsea, and slammed a right-footed shot
back across Uzoho. The goalkeeper was left grasping air, the ball was in
the net and Messi was scampering off in celebration.
In the stands Diego Maradona folded his arms across his chest and raised his eyes to the heavens in relief.
And with that it was the 100th goal of this World Cup, Messi became the
first player to score in this competition as a teenager, in his 20s and
in his 30s and 660 World Cup minutes without a goal ended for him.

Messi had
been stationed out towards the right-wing in this re-worked team but,
for 45 inspired minutes, he simply used that as his launch-pad. It was
his finely-weighted pass that split the Nigerian defence to send Higuain
through only for Uzoho to smother and he stepped up to take the
free-kick after Leon Balogun tripped Angel Di Maria. From it Messi swung
his shot left-footed across goal with the ball cannoning back off the
far post. It would have gone in but for a finger-tip touch from the
diving Uzoho.

Nigeria have proved themselves to be far better in the second-half of
matches and so it proved again. If one of Messi’s tunnel messages was
to concentrate, not do anything stupid then it was not heeded by
Mascherano who foolishly held Balogun at Nigeria’s first corner after
the re-start. The penalty was given and Victor Moses calmly stroked it
beyond debutant goalkeeper Franco Armani to level the scores.

Argentina were stunned. Suddenly panic set in as they desperately
tried to regain the initiative. The body language of both sets of
players switched and Iheanacho’s replacement, Odion Ighalo, shot
wastefully wide and was later denied by Armani when he had to score. By
now nerves were frayed. Argentina escaped the penalty appeal, a draw
would not be enough but, through Rojo, they grasped the lifeline.