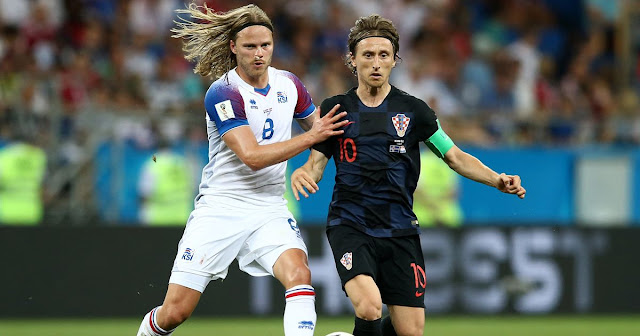 Iceland failed in their attempt to reach the World Cup knockout stages for the first time as Croatia secured a late win to top Group D on maximum points.

The Nordic nation knew they had to win to stand any chance of reaching the last 16 and their colourful support looked dejected in Rostov-on-Don where their side missed key chances late in the first half.

Alfred Finnbogason and Birkir Bjarnason both went close before the interval but Milan Badelj stylishly slammed home for Croatia after the break.

That forced Iceland to chase the game and they hit the bar through Sverrir Ingason before Gylfi Sigurdsson won and converted a penalty to level when Dejan Lovren handballed.

In the dying minutes, with Argentina leading Nigeria 2-1 some 1,100 miles away in St Petersburg, Iceland knew a win would see them jump ahead of the South American nation in second place.
But their attacks became less frequent as Croatia took more control and Ivan Perisic – one of only two players to retain his place from the win over Argentina – fired across the keeper to win it for Croatia in injury time.
His side now face Denmark in the last 16 on Sunday, while Argentina will play France on Saturday.


Croatia win Group D and have conceded just one goal in their three wins so far
With a population of around 300,000, Iceland’s achievement in becoming the smallest nation to reach the World Cup understandably saw their fans wear faces of pride and disappointment on the final whistle.
They arrived in southern Russia knowing even a win may not be enough if Nigeria had beaten Argentina, but the manner in which they missed chances at key moments – against a side sporting nine changes from their last game – will perhaps feel like an opportunity wasted.

Heimir Hallgrimsson’s side were the lowest scorers of the European sides who qualified automatically for the tournament and a lack of end product undoubtedly proved key in their exit.
They had grown into the opening 45 minutes as a Croatian side showing little intent ended the period on the back foot despite having 65% possession.
Finnbogason side footed fractionally wide into the side netting from 18 yards, Bjarnason could only drive against the legs of keeper Lovre Kalinic and Aron Gunnarsson was denied by a one-handed save on the stroke of half-time.
Iceland’s players found their family members in the crowd afterwards but the likes of Gylfi Sigurdsson appeared dejected
Badelj made them pay as, moments after rattling the bar from 30 yards, he powered a shot into the ground which flew into the net.
The instant fight shown epitomised the qualities which have endeared Iceland to so many with Ingason heading to force a save and then planting another header onto the bar from the resulting corner.
Sigurdsson lifted home a penalty which Lovren conceded with his first touch on the pitch but Iceland – perhaps finally feeling the effects of long spells out of possession, succumbed to Perisic’s powerful left-foot strike.
Defeat added pain to their exit but, as was the case in Euro 2016, they have remained competitive on a grand stage.

Milan Badelj (left) drove the ball into the floor powerfully and it fizzed into the net for Croatia’s opener.
In contrast to Iceland’s frustration, Croatia appear a side rejuvenated under Zlatko Dalic, who only took charge with one World Cup qualification match remaining.
His side were beaten to top spot in qualifying by Iceland but have not yet lost a competitive game under his charge and this win – with a much-changed line-up – perhaps points to a confidence running through the squad.
Only Perisic and Luka Modric remained from the 3-0 win over Argentina but the likes of Fiorentina midfielder Badelj – who added an assist for the winner to his own strike – showcased the depth the eastern European country boast.
Real Madrid’s Mateo Kovacic came into the side and in 82 minutes, completed 78 of his 79 passes in a composed display, while former Tottenham defender Vedran Corluka was robust and completed a game-high nine clearances.
This was far from an intense or overly impressive display by the group winners but they spent long spells keeping possession without ever looking like over-exerting themselves. Ultimately, the result only adds to their momentum.
They have now won three World Cup matches in a row for the first time and in doing so, win a group at the tournament for the first time too.
Dalic says he is convinced the last-16 will not be the end for his side. They look set to arrive in Nizhny Novgorod for Sunday’s meeting with Denmark fresh and dangerous.

Analysis – Could Croatia and their ‘animal’ win it?

Perisic fired his winner left-footed across the keeper
Former England and Man Utd defender Phil Neville: The teams underneath the top sides have relaxed and enjoyed the tournament. I can’t see Argentina improving that much, Germany have problems in their camp, France have not impressed me.
It might be a World Cup when we have a Leicester City-type winner.
Croatia have probably been the best team in the competition. In terms of consistent performances they have been the best team in the competition. If Denmark play like they did today, I can’t see them beating Croatia.
I like the style of play. They are solid at the back, the three in midfield control the game and Mario Mandzukic is an animal up front.
BBC Sport South American football expert Tim Vickery: What a midfield Croatia have. They are the team who could do serious damage. I saw them at Anfield when they played Brazil and in the first half Brazil couldn’t get out of their own half.

Man of the match – Mateo Kovacic

In addition to completing 99% of his passes, Mateo Kovacic won four tackles – a high for Croatia. With 98 touches he saw more ball than anyone on the pitch and, in a display in which Croatia were happy to keep the ball for long spells, his role was pivotal.

Croatia coach Zlatko Dalic: “We have three wins, nine points, with a goal difference of 7-1. That only goal we got was from the penalty, so we have to be happy.
“The first place was our goal, we did it. I am convinced that this game in the Round of 16 will not be our end, we are waiting for Sunday to show the true power, this is the day of truth for us.”
Iceland coach Heimir Hallgrimsson: “We have not played many games like this one, against a strong team like Croatia, and created so many chances so we are disappointed with that but I am proud of the performance and the character.
“We were unlucky today but we can carry our heads high and say we did everything we could.” 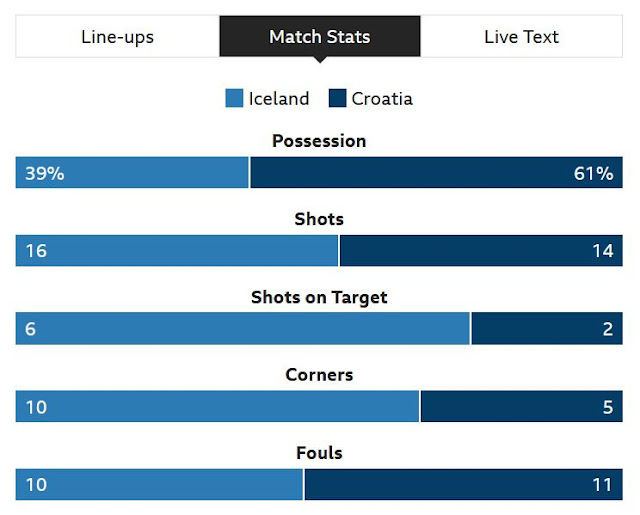