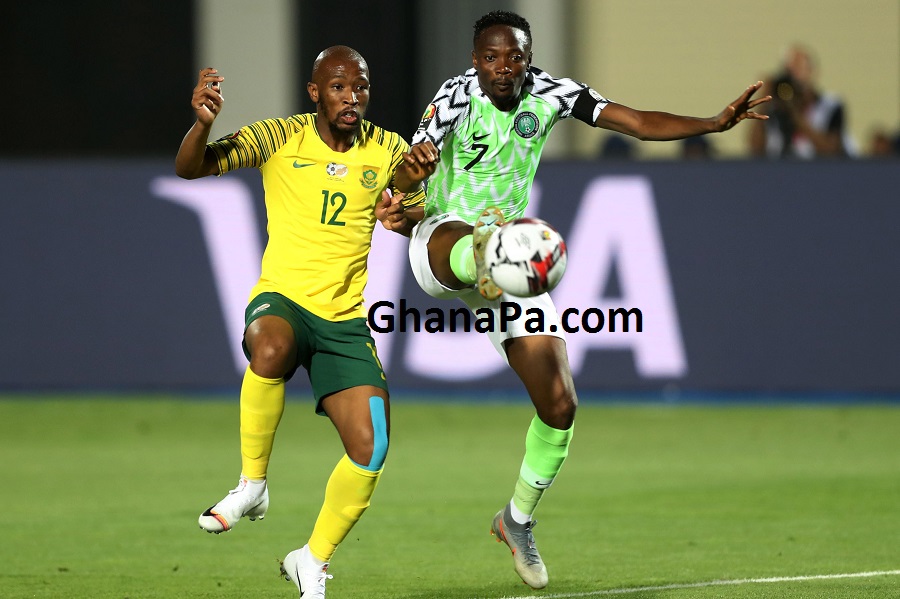 Samuel Chukwueze opened the deadlock after 27 minutes. VAR was used to confirm South Africa’s equalizer scored by Bongani Zungu after 74 minutes, but William Troost Ekong scored one minute from time to send the Super Eagles for the semifinal for the first time since they were crowned champions in 2013. They will now wait to see their opponents from Algeria and Cote d’Ivoire who lock horns in Suez on Thursday.

South Africa will leave Egypt with heads high after reaching the last eight despite playing in the group of death, and then eliminating hosts and favorites Egypt from the Round of 16.

Wilfried N’didi gave Bafana Bafana an idea of what to expect when he had the first shot after 6 minutes. And despite seeing South Africa with more possession, Nigeria had the lion share of chances.

Chukwueze broke the deadlock after 27 minutes after receiving the ball from Alex Iwobi inside the vital area. His initial shot was deflected from defense but he managed to collect the ball again and score past Ronwen Williams between South Africa’s posts.

After the break Nigeria were about to double their lead. Peter Etebo sent a scorcher from a free kick but Williams hand and the crossbar stopped him after 51 minutes.

And after 73 minutes VAR interfered to give South Africa the equalizer. From a free kick Bongani Zungu sent a header that wronged Akpeyi. The goal was initially ruled offside but VAR proved the ball came from a Nigerian defender back to let the goal stand.

Iwobi tried to restore Nigeria’s lead but his shot missed the target after 80 minutes.

And when it seemed the game is going to extra time, Williams made a fatal mistake when he missed a corner kick to leave William Troost Ekong to score in the empty net wending the Super Eagles to the semifinal.

We worked so hard to be here. I’m very happy we are now in the semifinal. We were pushing hard to win this game and it was not easy.

It was a great match. South Africa is a very good team, they had a very good game against Egypt but it’s too difficult to do this two times in a row. We were lucky to score in the last minute, but yet we were mentally strong to do this. I salute South Africa for having a great team. What was the best today is the great spirit between both teams. Our next game is going to be more difficult, but we will be ready.

It’s always sad when you lose a game in the last minute. In the first half we were not brave enough but in the second we were much better. We still couldn’t find that last touch. Nigeria is very dangerous and have some very good players. We tried to win but we lost in the dying minutes.
Congratulations to Nigeria coach and team and I’m sure they are going to do great job.