Prophet Nigel can’t beat me to prophecies, He is My Small boy koraa – Rev. Owusu Bempah 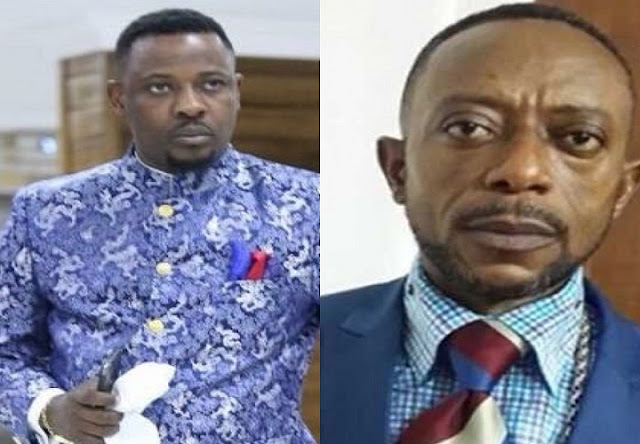 Founder and leader of the Glorious Word Power Ministry International, Reverend Isaac Owusu Bempah has described his colleague prophet, Nigel Gaisie as a ‘junior’ who does not match a ‘senior prophet’ like him.

According to Rev. Owusu Bempah, Prophet Nigel is someone he literally tutored in the gospel ministry and he cannot match him when it comes to delivering prophecies.

Rev. Owusu Bempah made the claims while responding to recent prophecies predicting that former President John Mahama would win the 2020 elections should the NDC present him as their candidate.

Prophet Nigel, founder and leader of the True Fire Prophetic Ministry (TFPWM), who came into the limelight after a video of him predicting a sudden death for Ebony Reigns surfaced after the singer’s death, is one of those who have prophesied electoral victory for ex-President Mahama in 2020.

“God told me if the NDC selects any other person [as presidential candidate] apart from the former president, they will lose. They should not try. But if they bring Mahama, the revelation is that, they [NDC] will win”, Prophet Gaisie predicted in another video.

Prophet Nigel’s ‘prophecy’ goes directly against an earlier one from Rev. Owusu Bempah which suggested that former President Mahama will never come back to power.

Speaking in an interview on Okay FM, Rev. Owusu Bempah insisted ex-President John Dramani Mahama has no chance of leading the country again.

“I always say and maintain Mr Mahama will never be President of this country again. I hear prophets claiming that he will win with the latest one being Prophet Nigel.

“That man of God [Prophet Nigel] is my boy. He used to come to my church on Tuesday’s for prayers and anointing service. In every business, there are the seniors. These prophets are all my juniors and there is no way they can beat me [to prophecies],” he said.

Questioning the genuineness of such prophecies, Rev. Owusu Bempah noted that since 2020 will come soon, it was just a matter of time before Ghanaians will realise who is the real prophet of God.