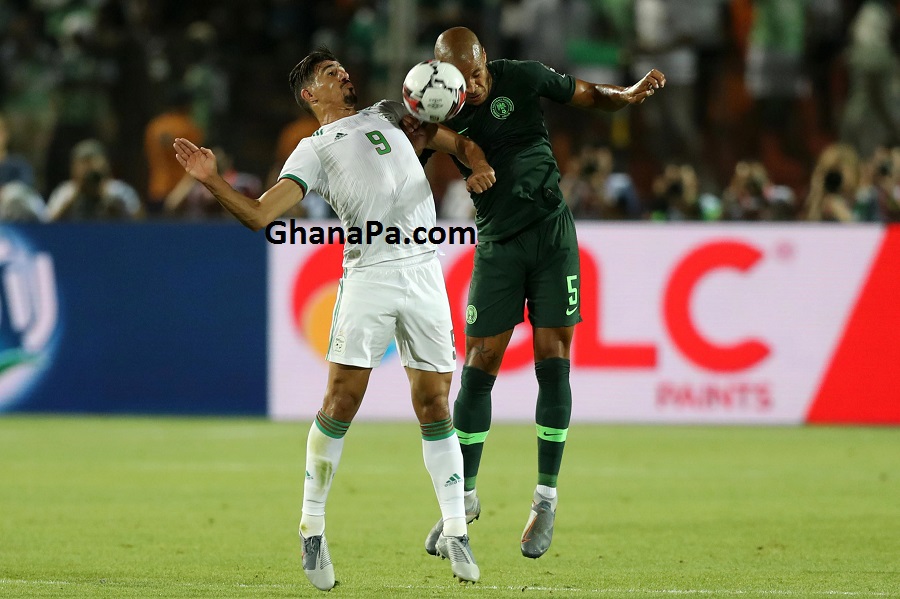 Baghdad Bounedjah of Algeria challenged by William Paul Ekong of Nigeria during the 2019 Africa Cup of Nations Finals, Semifinals match between Algeria and Nigeria at Cairo International Stadium, Cairo, Egypt.

They will face their group opponents Senegal in the grand final next Friday (19 July 2019) at the same venue with the Holy Grail of African football at stake.

Mahrez cross led to William Troost-Ekong putting the ball into his own net after 40 minutes, before VAR gave Nigeria a penalty from which Odion Ighalo found the equalizer at the 70th minute.

But Mahrez scored a superb freekick to hand Les Fennecs a place in the final four minutes into stoppage time amidst wild celebrations from Algerian supporters.

Possession swung between both sides in the first minutes with players looking cautious. The game’s first real chance came at the quarter hour mark from a free kick that Isamil Bennacer sent to Rami Bensabaini, but the defender’s header went just wide.

Where To Watch African Cup of Nations 2019 Live TV

With possession going towards Les Fennecs side, Baghdad Bounedjah was about to give Algeria the lead after 29 minutes. Youcef Belaili pass found the striker who rounded his marker, but his shot went straight to Nigeria’s goalkeeper Daniel Akpeyi hands.

The first real chance for the Super Eagles came after 38 minutes when Alex Iwobi found Odion Ighalo, but the striker’s shot went wide.

Les Fennecs broke the deadlock five minutes from the break. Riyad Mahrez sent a calling cross that was deflected from Nigeria’s defender William Troost-Ekong to his own net giving Algeria a deserved lead into the halftime.

Nigeria started the second half on attacking note trying to find the equalizer, but found a resolute Algerian defense that stopped all their attempts. Alex Iwobi tried from distance on the hour mark but missed the target widely.

Algeria tried depending on the counter attack, but couldn’t make a difference. And after 70 minutes the game took a turnaround.

Video Assistant Referee (VAR) intervened to give Nigeria a penalty for a handball on Aissa Mandi. Odion Ighalo made no mistake from the spot to tie the game at 1-1.

Algeria players looked fatigued and tried to keep their opponents at bay, relying on Mahrez and Belaili’s speed in counter attacks.

Ismail Bennacer could have given Algeria the lead two minutes into stoppage time but his shot kissed the crossbar.

And it was Mahrez who won the match for Les Fennecs four minutes after the full time mark when his free kick was perfectly placed over the wall and into the net to lead Les Fennecs to the final for the second time in their history and the first since1990.