TREND NEWS
Home FIFA WORLD CUP Spain vs Morocco [2:2] – Spain clinch late equaliser to top Group B by the skin of their teeth against valiant Morocco as VAR controversy reigns

Spain vs Morocco [2:2] – Spain clinch late equaliser to top Group B by the skin of their teeth against valiant Morocco as VAR controversy reigns 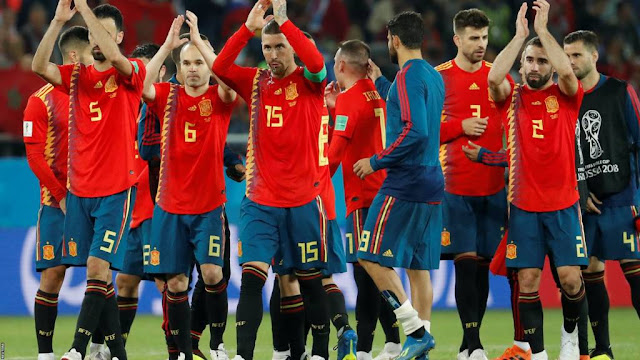 As this match entered added time, Spain were staring into the abyss. Their ongoing participation in the 2018 World Cup had slipped out of their hands and they were reliant only on their great rivals, Portugal, continuing to frustrate Iran.

Seven extraordinary minutes later and, after a back-heeled volley, a major Video Assistant Referee controversy, several scuffles and a mini pitch-invasion, they were somehow into the last 16 as Group B winners.

Fernando Hierro’s team were ultimately rescued here by Iago Aspas’s wonderfully improvised finish but, with his goal having initially been ruled out for offside and then narrowly reinstated by the VAR, but all the late drama still papered over some quite alarming cracks.

It also provoked fury from within the Morocco squad. They had been within grasp of one of their most famous ever wins and, amid angry pitchside exchanges between members of the respective backroom teams, Hierro later stressed that his coaches had not requested the use of technology. Morocco winger Nordin Amrabat still could not contain his frustration, mouthing the words, “VAR is b——-” into a camera as he left the pitch.

Morocco forward Aziz Bouhaddouz also again brought up the defeat against Portugal, arguing that his team had “no luck” and bluntly describing the refereeing as “s—”.

It was easy to sympathise with Morocco’s disappointment after three matches in which one point did not do justice to their performances, even if the technology here did eventually ensure the correct decision. Indeed, while the possession statistics will confirm that Spain were their typically dominant selves on the ball, the real story of the match was their quite shocking defensive vulnerability.

Russia await at the Luzhniki Stadium on Sunday and, if the hosts can organise themselves effectively, they certainly have the counter-attacking qualities to seriously trouble the 2010 champions. With Sergio Ramos especially poor – and involved in a terrible mix-up for the first and then beaten aerially for Youssef En-Nesyri’s brilliantly headed goal – this was a match that Liverpool fans would certainly have enjoyed.

It was noticeable that Hierro repeatedly refused to comment on the individual performance of any of his defenders. “Personal grades are for in-house,” said Hierro. “We need to look at the silver lining but we have to be self-critical. To concede five goals in three games is not the way forward. We were lucky. If other teams score so easily, it will be very difficult to reach our goal.”

The whistles that had earlier rung at around Kaliningrad from the moment Spain kicked off told you everything about the supporter imbalance. While Moroccans made up most of the crowd, blue empty seats also comfortably outnumbered the 1,000 or so Spain fans in this most western corner of Russia.

Spain’s starting team was still vastly experienced. Five of their 10 outfield players had already won more than 100 caps and yet there was a curious edginess about their approach. Gerard Pique, who would also have a torrid evening, soon dived in with an inexplicably wild challenge on Morocco striker Khalid Boutaib that could very easily have provoked a straight red.

Ramos and Andres Iniesta, who have collectively played 285 times for Spain, then combined to make an error straight out of a video of parks-football bloopers. Both decided to leave the ball and, with only a loud touchline scream of “One of you!” missing from a scene straight off Hackney Marshes, Boutaib gratefully surged clear on David de Gea’s goal and side-footed his finish between the Manchester United goalkeeper’s legs.

The goal did provoke rather more urgency from Spain. Iniesta soon combined delightfully with Isco and, after an exchange of passes, quite effortlessly nudged the ball back into the Real Madrid midfielder’s path to equalise.

Spain almost immediately fell back to sleep. A simple long throw was all it took to then again release Boutaib but De Gea this time managed to block the subsequent shot for what was his first actual save of the World Cup.

Morocco’s tally of four yellow cards in the opening 45 minutes told you everything about how much they wanted to win and they maintained their threat at the start of the second half. Amrabat spectacularly beat De Gea with a powerful strike but it just did not quite curl back sufficiently and smashed off the inside angle of post and bar.

Hakim Ziyech claimed a penalty when his volley bounced off Pique’s arm and, from Faycal Fajr’s resulting corner, En-Nesyri rose above Ramos to head Morocco into the lead. The drama had not ended. A desperate last gasp injury-time cross came in for Aspas, who improvised wonderfully to back-heel his finish past goalkeeper Monir El Kajoui.

News then filtered through that Portugal had also been held and it is somehow Spain who will face Russia in Moscow this Sunday.