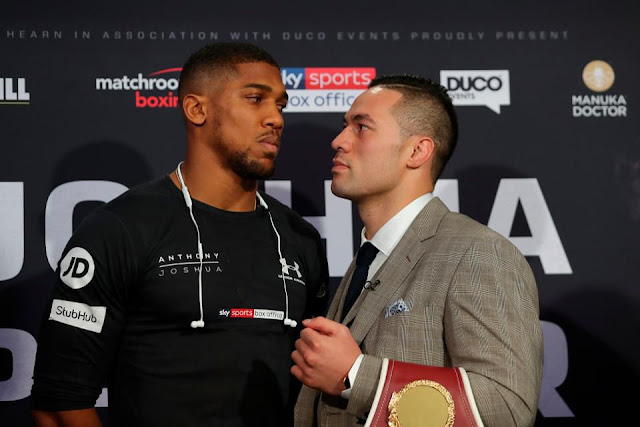 According to GhanaSky.com analyst, Anthony Joshua vs Joseph Parker will be an excellent and important fight between two of the top three heavyweights in the world, but you have to like Joshua to get the job done against Parker.

The excitement in boxing’s heavyweight division has returned. Two of the three men most responsible for the division’s resurgence will battle on Saturday night at the Principality Stadium in Cardiff to unify three-fourths of the weight class’ titles.

WBA and IBF champion Anthony Joshua (20-0, 20 KO) will attempt to defend his titles and capture WBO champion Joseph Parker’s (24-0, 18 KO) belt in what will be one of the biggest global sporting events of the quarter.

Showtime is Joshua’s U.S. television distributor, and the premium cable network should score big with this event. Here is the necessary viewing information:

Joshua-Parker shouldn’t have much of an issue winning its time slot with sports fans. It goes head-to-head with third-round action of the PGA Tour’s Houston Open (NBC), the NCAA Men’s Final Four Pre-Show will be in its second hour and there’s also a nationally televised MLB game between the Houston Astros and Texas Rangers on Fox Sports 1. If Joshua and Parker’s bout goes the distance, it could run into the first-hour of Final Four action, but overall things look relatively clear.

Expect to see massive numbers for this fight live and the potential replay later in the evening.

Anthony Joshua vs Joseph Parker: What time is the fight, what TV channel is it on and what are the odds?

What is it?
Anthony Joshua and Joseph Parker will both put their heavyweight world title belts on the line in the first major boxing bout of 2018 this weekend.
Parker, 26,  is putting his WBO belt on the line while Joshua, 28,  is defending his WBA and IBF titles in a winner-takes-all fight.


Where is it?
Cardiff’s Principality Stadium, where Joshua successfully defended his titles against Carlos Takam – will host the bout.

What time will the fight start?
No official ring-walk information has been provided as of yet but it is expected that Joshua and Parker will take to the ring no later than 10:30pm.

What TV channel is it on?
The fight will be broadcast live on Sky Sports Box Office.
It will cost £19.95 up to midnight on Friday March 30 – ie the day before the fight – but will go up to £24.95 for telephone bookings on the day of the fight. Online and remote control bookings will remain £19.95.

How do I book?
You can book online by clicking here.

To stream the fight, you can order online here and then watch it at the same link, or download the Sky Sports Box Office app.