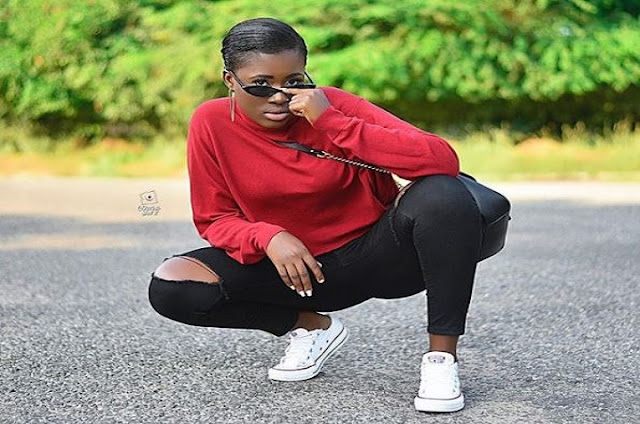 Fella who was called during the “Total Showbiz” segment of the show to clarify issues concerning the alleged closure of her wine shop, refused to answer all the questions she was asked and rather spoke about the re-opening of her wine shop at a different location and rudely dropped the phone after she finished saying what she wanted to say.

The fast rising actress has over the weeks caught the attention of Ghanaians after she was accused of cheating on her boyfriend leading to the alleged closure of her wine shop.

The boyfriend is said to have been upset over her lifestyle and lack of concern for their relationship and allegedly shut down her wine shop at East Legon.

What happened on Okay FM yesterday was that the YOLO star, in an interview with Abeiku Santana and Eugene Osafo-Nkansah was given the opportunity to discount the rumors and allegations leveled against her.

Something that the listeners of the show and many Ghanaians felt was a great opportunity for her to receive empathy after experiencing her ordeal was short-lived when she hung up the phone in complete disrespect to Abeiku Santana, his co-hosts, his listeners and the production team as well as the media organization.

The actress sarcastically promoted her new wine shop on the programme which the host patiently accommodated and then she suddenly cut the call on him, claiming there’s “traffic” in town.

To add salt to injury, Fella’s manager called into the programme after realizing the tactless act by Fella Makafui.

According to GhanaSky.com checks through Razzonline, the manager seeking to do damage control for the actress refused to allow her to apologize for her act, telling the host “she is driving and cannot pick up calls”. This was however after she gracefully picked up the call to advertise the relocation of her new wine shop.

Fella Makafui’s attitude has made her fans and listeners of the programme angry and they are calling on her to eat humble pie and render an apology to the “Total Showbiz” team.